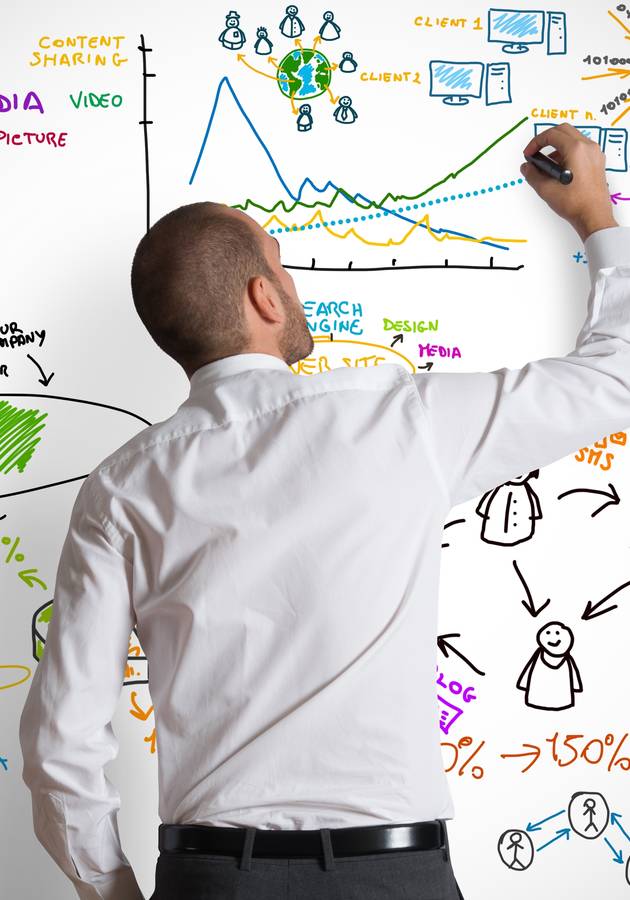 This microbook is a summary/original review based on the book: Purple Cow: Transform Your Business by Being Remarkable

“In a world of million products and billion commercials” – marketing guru Seth Godin writes in “Purple Cow” – “your one chance for success is to be remarkable.” And that’s what this book is about: the why and the how of becoming extraordinary.

So, get ready to learn why the profession of marketing has changed forever and why TV and mass media are no longer your secret weapons. Also, prepare to discover how to put a ‘purple cow’ into everything you do – you’ll see what we mean in an instant.

Before, during, and after advertising

Marketing is not what it used to be. One can even argue that it has changed so much during the most recent times that the real question may not be what it has turned into, but whether it is still important and worth the money and the effort. To discover, let’s look back at the three different stages in the history of advertising.

Before advertising, there was only word of mouth. In other words, for long periods of history, recommendations were the driving force for entrepreneurial success. If your product or service was worthwhile, it could become a topic of discussion; if this didn’t happen, then there was no way for you to prosper. The booths of the best vegetable sellers at the market were always crowded not because they were better placed than those of their peers or had better slogans, but because of the earned reputation for being the best among the buyers.

During advertising, marketing was all the rage. Thanks to the perfect combination of “increasing prosperity, seemingly endless consumer desire, and the power of television and mass media,” a magic formula was quickly pieced together by smart advertisers: market directly to the consumer and sales will inevitably go up. In other words, you didn’t even need to be good to succeed – you just needed to find the right ad agency, and you could grow to be almost as big as you could imagine.

“After advertising,” says Godin, “we’re almost back where we started.” The only thing different from the time before advertising is that now we use social media networks instead of the “slow and awkward word of mouth.” Recommendation is, once again, the driving force for success. However, nowadays, good ideas – bad as well – diffuse at rocket speed through different segments of the population.

The new P in the marketing mix: Purple Cow

During the golden era of advertising, all you needed to succeed was money and guts. Why? Because having more money meant being able to buy more ads, and more ads meant better distribution. This, of course, led to a greater number of sold products and bigger profits, which, in turn, meant even more money to invest in new ads. Marketing wasn’t rocket science in the 1960s: it was a simple, virtuous cycle that benefitted big marketers by its very design.

And out of this simple concept, a powerful idea was born, one that is even today found in the introductory pages of most relevant textbooks and manuals: the marketing mix. Dubbed “a foundational business model,” the marketing mix originally comprised the following 4 Ps: product, price, promotion, and positioning. Marketing was all about putting these four things in sync, that is, promoting the right product the right way, at the right price, to the right people.

However, as time went by, more and more Ps were added to the mix, and, soon enough, there were too many to count: process, people, physical evidence, publicity, packaging, pass-along, permission… According to Godin, all of them combined are not enough anymore, and they should make way for a new P, a P that is suddenly exceptionally important: the purple cow.

To understand the concept better, you need to know that Godin got this idea while marveling with his family at the sight of hundreds and hundreds of “storybook cows” grazing on picturesque pastures next to a French highway. Everything was fairytale-like for about half an hour and, then, suddenly, the amazement was gone. The problem: the new cows looked just like the old ones. They were all either brown or white with black spots. Nothing was appealing about any of them. They had abruptly become very common and ordinary. Even worse – they were now uninspiring, uninteresting, boring. “A Purple Cow,” thought Godin for a moment - now that would be interesting.

And this is the essence of the purple cow: it is uncommon, exceptional, extraordinary. It is, in the word Godin prefers, remarkable. Everything you need to know about marketing in the post-advertising world is packed in that single word. Because something remarkable is always worth noticing and worth talking about. Because it jumps out of the picture by being different. Because it’s not brown when everything else is.

OK, you say, I get that we’re living in a day and age when, due to the speed with which ideas and recommendations spread, only remarkable products have any chance to succeed. But doesn’t this make marketing obsolete altogether? After all, if it is all about the quality of the product and about the barely controllable social media word of mouth, what should an ad agency do today?

These questions, according to Godin, stem from a big misunderstanding that, in turn, is just a remnant from the golden age of advertising and the so-called “TV-industrial complex,” defined as “the symbiotic relationship between consumer demand, TV advertising, and ever-growing companies that were built around investments in ever-increasing marketing expenditures.”

Ads were merely an adornment in the age of the television: first, the product was designed and built, and then it was the job of marketers to make the product “attractive or interesting or pretty or funny” for as many people as possible. However, in the post-TV age, marketing should never be the last thing on the agenda. It shouldn’t be something that comes after the product – instead, it should be about designing a virus-worthy product in the first place.

“Remarkable marketing,” elucidates Godin, “is the art of building things worth noticing right into your product or service. Not slapping on marketing as a last-minute add-on, but understanding that if your offering itself isn’t remarkable, it’s invisible.” If the old rule was “to create safe, ordinary products and combine them with great marketing to reach everybody,” the new and updated rule is this: “create remarkable products that the right people seek out.”

Choosing a target group in the post-consumer society

Speaking of the right people – you’ve got to have in mind that even consumers are very different in the post-TV age. Most of them aren’t even interested in advertising – not merely because they’ve stopped believing what commercials throw at them, but also because they couldn’t care less. “The post-consumption consumer is out of things to buy,” explains Godin. “We have what we need, we want very little, and we’re too busy to spend a lot of time researching something you’ve worked hard to create for us.”

In a nutshell, we’ve created a world where most products are invisible and where most consumers buy only what other people say that is worthy. But who are the people that start the avalanche? Who are the people before the tipping point? In 1991, in his exceptional book “Crossing the Chasm,” organizational theorist Geoffrey Moore tried to answer this question by introducing a variation of the previously devised “technology adoption life cycle.” According to him, in our entrepreneurial age, new products and ideas move across five groups of consumers:

Now, the largest segment of the consumer population is made up of the early and late majorities. Traditionally, marketing was all about them. Nowadays, it’s very different: since only the remarkable product or service succeeds, and since the remarkable is usually new and innovative, products should target the early adopters: they are the ones who’ll try new things and spread the word. The majority merely adopts it.

The problem with the purple cow

So, if the TV-industrial age was about advertising average products to just about anyone, the post-TV age is about advertising remarkable products to the early adopter. With this paradigm shift, however, another more subtle change occurred: fear was not about failure from trying anymore, but about fear from trying itself. That is why purple cows are so rare: people are afraid to risk because playing it safe and following the rules may be the best way to avoid failure in school, but in a crowded marketplace, “fitting is failing” and “not standing out is the same as being invisible.”

Moreover, standing out doesn’t mean just being very good – “very good” is actually the opposite of being “remarkable.” Very good is hardly worth mentioning: it’s what factories do all the time when they meet their previously set quality requirements. But that is boring. And boring leads to failure. “Boring is the riskiest strategy,” writes Godin. “The lesson of the cow is worth repeating: Safe is risky.”

This is not just a paradox, but a fact of modern life. Most companies are so afraid of offending someone or appearing ridiculous that they purposefully steer far away from risks and end up being boring. But just think of the J. Peterman catalog for a second: it was so ridiculous that “Seinfeld” parodied it. Would you have heard about it if it was “safe and steady and boring?” Embrace risk and prepare for the criticism that comes with it. As Godin writes, “the best the timid can hope for is to be unnoticed. Criticism comes to those who stand out.”

Eight ways to bring the cow to work

If you’re feeling a bit Orwellian and what you want to take away from this book is just a few “clip-’n’-save slogans,” these four should be enough: “don’t be boring,” “safe is risky,” “very good is bad,” and “design rules now.” If you need a few practical ways to bring the cow to work, Godin has got you covered there as well:

Throughout the last few decades, Seth Godin has introduced so many new concepts to the marketing jargon that it’s difficult to keep track. However, “Purple Cow” seems to be one of the most enduring.

There’s a reason for that: even if that’s the only thing you’ll take away from this book, it’s more than worth the read.

Don’t be boring: the riskiest marketing strategy in the modern world is playing it safe.

One of the foremost marketing gurus of the modern age, Seth Godin is an American blogger, entrepreneur, and bestselling author. A former dot-com business executive, Seth Godin used his innovative company Yoyodyne to promote the concept of permission marketin... (Read more)

Purple Cow is now available in the 12min app! Download now and read for free.

Purple Cow is now available in the 12min!

The microbook based on Purple Cow is already available on 12min. Leave your email and you will receive a invitation to download the 12min app. Our app is available for iPhone and Android and in it you will find all our microbooks in text and audio. By registering, you get 3 days of unlimited access!