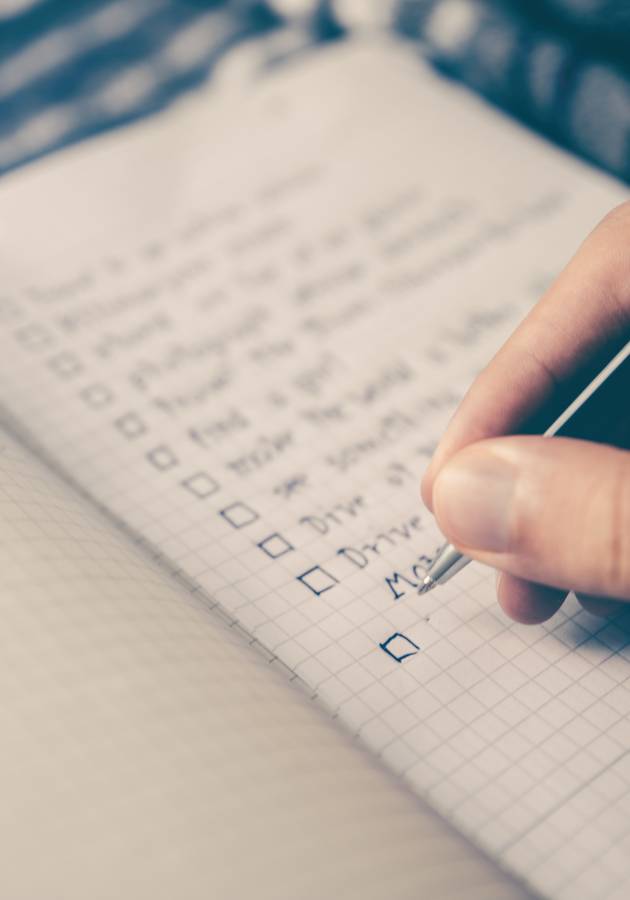 This microbook is a summary/original review based on the book: The Checklist Manifesto: How to Get Things Right

Have you ever left the house and had to turn back because you forgot your wallet? Or are you stuck on a complex problem and don’t know how to solve it? Then read on, as the solution might already be at your fingertips.

Atul Gawande, one of the top 10 doctors in the world, realized over the course of his surgical career that major complications and deaths in surgery could easily be avoided by introducing a checklist. In “The Checklist Manifesto,” he imparts his experience and helps you take control of your life as well!

So, get ready to learn how to perfectly manage your life with a simple tool - a checklist!

One day, while exchanging medical stories with a colleague, Gawande learned of a shocking medical failure that occurred one Halloween night in San Francisco. A patient was admitted to hospital with a stab wound after a party. He was drunk but stable, still talking and not in pain. The surgical team decided they had time to prepare the operating room. Without warning, the patient crashed. His blood pressure went up, indicating internal bleeding, which was quite unusual for the small stab wound he had. He was rushed into the operating room where it was discovered that the wound was more than 12 inches deep. The main artery of the patient had been pierced - an injury comparable to those seen in field hospitals in war. Luckily, the patient was saved, but it was discovered later that he had not been stabbed with a knife, as assumed, but with a bayonet. No one had thought to ask him about the weapon that had inflicted the wound - a mistake that could have easily been avoided by using a checklist to admit the patient to hospital.

Sadly, this case is not an exception in the medical world. Recent data suggests that there are still more than 150,000 deaths following surgery every year, more than three times the number of road traffic fatalities. Research has also shown that at least half of these deaths or major complications could have been prevented.

Hospitals are often a demanding environment, with noises, emergencies and other constant demands distracting nurses and doctors from doing their jobs. This phenomenon is not limited to the confines of the medical world, either. From restaurants to airports, and building sites to the investment world, we live in a busy, ever-demanding time. This means that mundane, automated tasks often get forgotten in the hustle and bustle of daily life and work - and in fields such as medicine, aviation or construction, missing even just one step can be fatal. Checklists, Gawande says, can help with remembering these routine procedures.

Why do we need a checklist?

According to the philosophers Samuel Gorovitz and Alasdair MacIntyre, human fallibility is grounded in two aspects: ignorance and ineptitude. Often, we do not understand the full complexity of a situation. Even in cases where we do have all the facts, we still fail at times because we do not correctly apply the knowledge we have. Over recent history, the balance has shifted from ignorance towards ineptitude. Even though our ability to predict catastrophes has improved, there are still many catastrophes that go overlooked, or are recognized too late.

Gawande says checklists can protect society from these kinds of failures: “They remind us of the minimum necessary steps and make them explicit. They not only offer the possibility of verification but also instill a kind of discipline of higher performance.”

In 2001, Peter Pronovost, a critical care specialist at Johns Hopkins Hospital, introduced a checklist to tackle central line infections. It included simple, mundane tasks such as doctors washing their hands with soap before operating. Surprisingly, after a year of implementing the checklist, the 10-day line infection rate went from 11% to 0%. Apart from saving lives, this also saved the hospital about $2 million. Upon adopting the same checklist in Michigan’s ICUs (Intensive Care Units), the line infection rate decreased by 66% within the first three months.

When is a checklist useful?

The benefits of using a checklist in hospitals is evident. But are there limits to when a checklist can be usefully implemented? It all depends on the type of problem you’re facing. According to Brenda Zimmerman of York University and Sholom Glouberman of the University of Toronto, both professors of the science of complexity, three types of problems exist: simple, complicated, and complex.

An example of a complex problem is the raising of a child. Every child is different, and even though expertise will make the job easier, the outcome is still highly uncertain. Nevertheless, a solution to the problem is possible - we are all aware that it is possible to raise a child well.

Most problems encountered in the medical field are essentially simple problems, such as improving hygiene in surgery. These can easily be solved by a checklist. But what about the other two types of problems?

The building sector routinely has to deal with complicated and complex problems. After all, building a skyscraper is no simple feat, and every building project has its individual challenges. In a single building project, as many as 16 trades are involved. These experts must all work together to set up a construction plan, which, in essence, is a checklist. For large projects such as a skyscraper, a construction plan spreads over several sheets. On this, the building tasks to be accomplished are identified in color code, line-by-line and day-by-day. So even the most complex problems we face today can be simplified by using a checklist.

Using a checklist in a team

The rise of complex information and the sheer amount of knowledge humanity has acquired means that it is impossible for just one person to know everything. In the past, for example, there were  master builders - one person who oversaw major projects such as the building of the Notre Dame in Paris or the Washington Capitol. These days however, a shift has taken place towards teams working on a problem, as individuals have become “super specialized” in their area of work, therefore requiring the knowledge of others to successfully deal with a complex situation.

As a result, unforeseen complications are an integral part of building processes these days. To deal with those, the building industry has developed a second checklist, the so-called “submittal schedule” to specify communication tasks. Basically, this ensures regular communication between experts by scheduling meetings on certain days to survey the progress.

In surgery, the team consists of nurses, the anesthetist, the surgeon and assistants, all with their own special knowledge to assist with the case. To successfully operate, communication is essential, and this includes the communication of a checklist to every team member.

To enable better conversation, a so-called team huddle is advisable: Before starting a surgery or the job at hand, everyone should introduce themselves by name and the case should be briefly discussed. This also leads to better communication throughout the project.

Gawande was approached in 2006 by the WHO to become part of a team to solve the problem of unsafe surgery around the world. This led him on his personal quest to find the perfect checklist.

He used the construction world as a role model first, but quickly realized that their checklists proved too complex and long for the medical world. After all, a building project is spread out over several years, while in surgery, every second counts. So eventually, Gawande turned to the aviation world instead, using pilot checks as his blueprint for developing the perfect surgery checklist. In the end, he settled on 19 steps with three pause points (points at which a checklist is executed): before anesthesia, before incision and before wheeling the patient out of the operating room.

In 2008, his checklist was tested in eight hospitals around the world, including New Zealand, India and Tanzania. The results of using the checklist were beyond anything Gawande had hoped for. The rate of major complications in all eight hospitals fell by 36% and deaths by an astonishing 47%.

Gawande admits that even in his personal experience as a surgeon, a checklist saved at least one of his patient’s lives. In a routine removal of a tumor, Gawande accidentally sliced the vena cava, a major blood-carrying vein - something that had never happened to him before. During the efforts to save the patient, he lost three times as much blood as his body had contained to begin with. The only reason why enough blood was available was because the blood bank had been routinely informed to have blood reserves ready as a result of going through the checklist at the start of the operation.

Six steps to the perfect checklist

Whether you want to use a checklist in your professional or private life, these points will help you to create your perfect checklist. Just keep in mind that, to do a job well, you need to make a sound judgement of whether following protocol or following your intuition will yield the better results.

While rich in examples, “The Checklist Manifesto” is quite a lengthy read and also confusing in its structure. Nevertheless, it has been lauded as an innovative self-help book, helping us all to increase our productivity by the simple means of a checklist. The Financial Times wrote in 2010: “A welcome book  ... packed with vivid writing, heart-stopping anecdotes and statistical surprises.“

Try breaking down a complex task into a step-by-step checklist and see whether this has an impact on your productivity!

Atul Gawande is an American physician and journalist. He specializes in reducing errors, increasing safety and improving the efficiency of surgical procedures. He serves as the general surgeon and endocrine system at Brigham and Women's Hospital in Boston, Massachusetts and as associate director of the Center for Su... (Read more)