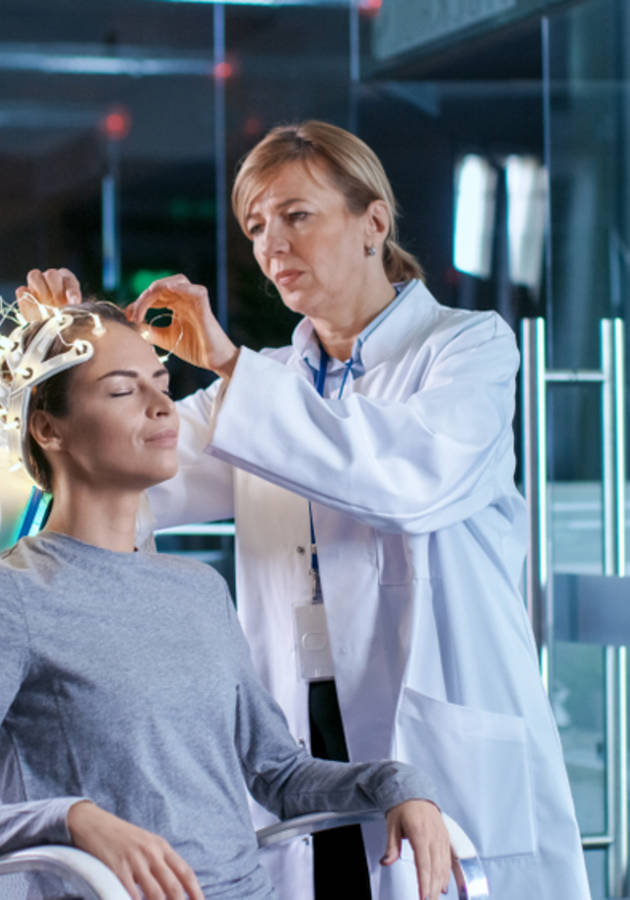 This microbook is a summary/original review based on the book: Neuroscience for Coaches: How to Use the Latest Insights for the Benefit of Your Clients

If you are a coach, then you likely already have your own method of dealing with clients. But do you understand the scientific basis of your method? If so, are you seeking neuroscientific tips to enhance its success?

Exceptionally structured, Neuroscience for Coaches is nothing short of an encyclopedia on the subject and a long Q&A session on everything related to it. It begins with Amy Brann, who introduces us to the structure of the brain, and later expands into how coaches can take advantage of this knowledge and leverage different training methods.

Get ready to discover more about which parts of the brain are responsible for which activities, and how you can trigger them when you need them.

Understanding the concept of neuroscience

At first, the concept of neuroscience may sound like a bit of a mouthful. At its purest, “Neuroplasticity” refers to the brain’s ability to change. “Self-directed neuroplasticity” is the process of willfully rewiring your synapses. The more you learn about this phenomenon, the more you’ll understand why Brann’s perspective is right on the spot.

In layman's terms, Brann’s perspective states nothing more than a few facts: 1) that our brain can change 2) that we can direct the course of these changes, and 3) that a coach is someone who helps us direct this course in a more disciplined manner.

That is, after all, what the etymology of the word “coach” encompasses. A coche is an old word for “a wagon” or “a carriage,” and a coach, much like a wagon or a carriage, takes someone from point A to point B. Since the dawn of time, people have understood that if they wanted to improve at something, they needed to get a coach. Coaching has a long history and, as Brann says, “a huge number of different models, strategies and training programs” have developed around and through coaching.

Neuroscience for Coaches is not a book that offers a new, revolutionary way of coaching, nor one that should supersede all previous models. It merely uses the new findings in neuroscience to underpin everything that sits on top of what a coach does. In other words, it uses science to help you understand the nature of your students. Also, it should give you a clearer picture of the methods that actually work as well as those that are clearly obsolete.

The structure of the brain

Before further exploring the structure of our brains, in a brief introduction, Brann introduces her readers to the evolutionary model of the triune brain, developed by physician and neuroscientist Paul D. MacLean in the 1960s. According to this model, “attractive in its simplicity” and “widely espoused,” there are three parts of the brain: the reptilian, the paleomammalian (the limbic), and the neomammalian.

Modern science is highly skeptical of MacLean’s model and numerous authors suggest that we should abandon it altogether. However, the model is very present in non-scientific circles, which is the only reason why Brann offers this introductory sketch. If you use it, she advises that you must do so with caution and to be aware that it functions best as a metaphor or an analogy. In truth, the structure of the brain is far more complex and, consequently, our reactions are much less predictable.

The function of the prefrontal cortex

The prefrontal cortex (PFC), as Brann writes, is “affectionately thought of as the CEO or conductor of the brain responsible for higher-level cognitive functions.”

The PFC is one of the newest brain areas and is involved in all of our executive functions, our ability to plan, decision making, expressing our personality, aligning our thoughts and actions with internal goals, and moderating social behavior.

Consequently, it should be very important to coaches, who must always remember two things:

Therefore, in coaching, you must aim to reduce stress, encourage focus, and break down long lessons into smaller chunks.

The function of the basal ganglia

The basal ganglia are “key to storing routines, repetitive behaviors, and thoughts.” In one phrase, it is “the home of habits.” These habits are stored in the form of thousands of mini-programs or maps which follow sets of “if/then” orders.

The main objective of the basal ganglia is simple: to save your brain some energy for more important operations by turning on the autopilot whenever it can.

Coaching is always about change and progress, so it is essential for your client to understand the structure and the function of the basal ganglia as well. This should not only help them see why their entire body is so resistant to new habits but also set them up for the acquiring and development of new habits.

The striatum and nucleus accumbens

The striatum is the core component of the basal ganglia. It’s  sort of a relay station that receives input from the cerebral cortex and gives input to the basal ganglia. The part of the ventrium closest to the face is called ventral striatum, and part of it is what is known as the nucleus accumbens. This area is “involved in pleasure, reward, motivation, reinforcement learning, fear, addiction, impulsivity, and the placebo effect.” Consequently, it is vital for coaches to understand it.

For example, the nucleus accumbens proves that, even though it sounds as if something picked straight out of a Science-Fiction movie, it is a scientific fact that there are things happening inside your brain, even when you are simply imagining things.

This is why imagining a scene when a certain goal has been achieved can actually be quite helpful. However, this doesn’t imply that visualizing a goal magically leads to its fulfillment, as many self-help books claim. It simply means that visualizing something has a positive effect on your brain, and makes the internal environment in your body more favorable.

“People are more likely to be motivated and take goal-oriented behaviors with a boost of dopamine in the NA, and so visualization may make a particular outcome more likely,” concludes Brann, busting one of the greatest myths in the self-help industry.

The insular cortex and its features

There is an insula in each of the brain hemispheres. They reside in areas of the cortex folded deep down between the temporal, parietal, and frontal lobes.

Insula is very well connected to the amygdala and is involved in a range of internal factors, including emotions, perception, self-awareness, decision making, cognitive functioning, and interpersonal experience. In fact, some authors, such as the renowned Antonio Damasio, suggests that it is because of the insular cortex that rational thinking cannot be separated from feelings and emotions. When the insular cortex is thicker, people are more capable of making a distinction between the objective and subjective and are much more “in tune” with themselves.

It has been demonstrated by numerous studies that mindfulness and meditation, commonly achieved with exercises like yoga and pilates, improve the cortical structure and make people more self-aware. With this in mind, there’s no question as to why they are included in many coaching programs nowadays. After all, science backs the idea that they should work.

The amygdala and its functions

The amygdala is an important part of the limbic system, which is heavily involved in regulating our emotional life. It is also important in memory, focus, and social processing.

To put it simply, the amygdala is the seat of the “fight-or-flight” response in your brain and the part of the brain which reacts the most instinctively. Special care should be taken by coaches if they want to maximize their client’s performance.

The anterior cingulate cortex (ACC) looks like a collar stretched around the frontal part of the corpus callosum (the bundle of neural fibers that connect the left and right hemispheres) and is primarily responsible for conflict and error detection.

According to Francis Crick, one of the discoverers of DNA, the anterior cingulate cortex may be the place where human free will is stored.

Why? Because the anterior cingulate cortex is excellent in comparing expectations and reality and is great at revealing to us whether what we get is what we have expected. The ACC is more about “awareness” than it is about doing things, which is why coaches need to stimulate it before doing anything else.

Since the ACC detects errors, motivating clients to assess and reassess situations by making a constant comparison is always useful.

The function of the hypothalamus

The hypothalamus is a small area of the brain responsible for various metabolic processes and synthesizing and secreting neurohormones. It is important in “regulating hunger, aspects of parenting and attachment behaviors, thirst, fatigue, and sleep.”

Consequently, unless you are working with clients on weight-loss goals, there’s not much you can do with them, even if you understand everything hypothalamus-related.

The function of the hippocampus

Located in the medial temporal lobe of the brain and resembling a seahorse, the hippocampus consolidates information from short to long-term memory.

A 2005 study demonstrated that people’s hippocampi are more active when they are successfully navigating, which is why cab drivers have larger than average hippocampi. On the other hand, PTSD results in reductions in hippocampal volumes.

This is possibly due to cortisol (a marker of stress) which has been shown to kill hippocampal cells in animals. If you want to truly help your clients and excel as a coach, there are several things that you can do to activate the hippocampus and, thus, stimulate memory.

The triune brain model is not accepted by neuroscientists

As previously stated, our brain consists of three parts. The first of which (the reptilian) is responsible for our instincts, the second (the limbic) for things like motivation and emotion, and the third (the neomammalian) for cognitive functions (language, planning, anticipation).

Unfortunately, none of this is backed by science. Referred to as the model of the triune brain, this model was proposed by Paul D. MacLean in the 1960s. However, it has since been disproven as a simplistic understanding of how our brain works. In reality, things are much more complex.

Even though our brain is much more complex than what the proponents of the triune model would like you to believe, it is still highly compartmentalized, with different parts of it responsible for different functions. We are far from understanding all of them, but thanks to numerous studies, we understand which parts are responsible for specific actions and can predict how a human might act in the absence of some of these brain parts.

As John Leary-Joyce - CEO of the Academy of Executive Coaching suggests, Neuroscience for Coaches is a book that can help you “provide a rational neuroscientific explanation for the interventions” and help you make a transition from “trust me I'm the coach” to “here's the explanation for why this will work.”

Don’t be afraid to bring a little bit of science into your game plan in order to maximize your performance.

Amy Brann is an author, consultant, international speaker and expert in the implementation of neuroscience within organizations. With a few other books to her name “Make Your Brain Work,” “Neuroscience and Coaches,” and “The Neuroscienc... (Read more)