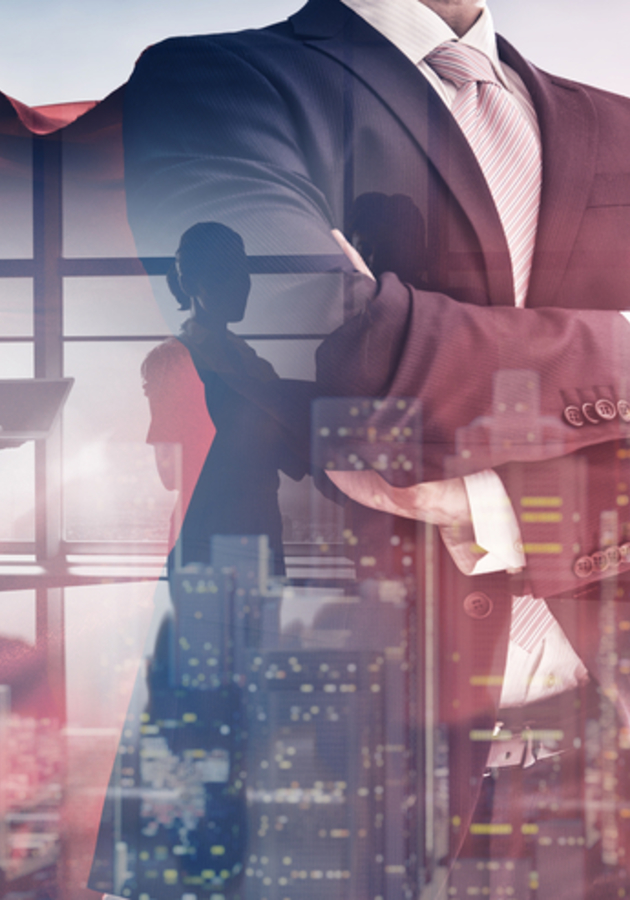 This microbook is a summary/original review based on the book: Leadership and Self-Deception: Getting Out of the Box

Similarly to bestsellers like Patrick Lencioni’s “The Five Dysfunctions of a Team” or Spencer Johnson’s “Who Moved My Cheese,” “Leadership and Self-Deception” by the Arbinger Institute is written in the form of a business fable. In other words, it tells a fictional story, the aim of which is not to move or entertain you, but to teach you a few valuable lessons you should be able to apply in the real world, thereby improving the organizational culture within your company.

The story which frames these lessons is as straightforward as they come. It concerns a fictional company with a pretty cool name, the Zagrum Company, and a guy with a rather big problem he knows nothing about, Tom Callum. As one of Zagrum’s new division heads, Tom is called one day to the office of Bud Jefferson, the company’s executive vice president and Tom’s soon-to-be new boss. During a day-long, one-on-one meeting – of the type Zagrum takes pride in – Tom’s life and worldview are turned upside down. The main subject of the meeting is self-deception. Get ready to find out why!

Self-deception, the problem beneath other problems

We often forget that our brains are resistant to the truth. But, then again, why would they not be? After all, they didn’t evolve to tell the difference between what’s right and what’s wrong: it was always much more important to our brains to discern between what was useful and what could cause harm. In other words, they weren’t built to be interested in evidence and facts, but in survival and self-preservation. Put simply, your brain will always prefer a lie to the truth if it judges it to be more valuable to your well-being. Moreover, once it makes this judgment, it will do its best to make you believe that the lie is actually the truth.

Of all the lies we tell, the ones we tell ourselves are the most dangerous ones. Philosophers call this self-deception. Bud Jefferson, the vice president of Zagrum, uses “a less technical name” for it: being in the box. It’s an apt image because it illustrates the essence of self-deception. Since both our lies and our interpretation of them hail from the same place – our brains – we do not even know that we are lying to ourselves when we do it. We can only see matters from our own closed perspectives, and we are deeply resistant to any suggestions claiming that the truth is different from the one we believe in. Self-deception, in a nutshell, cuts us off from reality, closes our minds to the truth, and makes us blind to other perspectives.

That is why self-deception is usually the problem beneath all other problems. “Identify someone with a problem,” says Bud to Tom at one point, “and you’ll be identifying someone who resists the suggestion that he has one. That’s self-deception – the inability to see that one has a problem.” Unfortunately, “there’s nothing more common in organizations than self-deception” – nor is there anything more damaging. Consequently, Zagrum has made it its top strategic initiative “to minimize individual and organizational self-deception.” In fact, as Bud explains, they basically treat it the way a doctor would a particularly dangerous virus. But that’s a story for another chapter.

On the subject of germs and doctors

Ignaz Semmelweis may not be a household name today, but it really should be: this 19th-century Hungarian physician is, arguably, responsible for saving more lives than any other person in history. And he didn’t invent any vaccine or a groundbreaking medicine: he was merely tidy. An obstetrician at the Vienna General Hospital, he became obsessed with something that was called “childhood fever” at the time. In the section of the maternity ward where Semmelweis practiced, one out of every 10 women giving birth died because of this illness. Nobody could understand what was causing it. In time, Semmelweis did: it was none other than the doctors themselves.

Since most of the doctors were required to split their time between research on cadavers and treating live patients, Semmelweis correctly assumed they must be transmitting some “particles” from the dead patients to the living ones. So, he instituted a policy “requiring all physicians to wash their hands thoroughly in a chlorine-and-lime solution before examining any patient.” Semmelweis was one of the few to obey his own policy, so the death rate at his maternity ward immediately fell tenfold!

Even so, he was ridiculed by other doctors, who felt offended at his suggestion that they should wash their hands. Knowing it was a matter of life or death, Semmelweis grew increasingly outspoken about his views and eventually suffered a nervous breakdown. He died at an asylum, after being severely beaten by the guards. Years later, his theories were confirmed by Louis Pasteur, the first man to provide direct support for the germ theory of disease.

“There is a similar germ that is spread in organizations,” says Bud to Tom after telling him this story, “a germ we all carry to one extent or another, a germ that kills leadership effectiveness and teamwork, a germ that causes a multitude of ‘people problems,’ a germ that can be isolated and neutralized – self-deception.” Just like 19th century European doctors, we can’t see this germ because it’s on our hands, and because it has infected us with the same disease we’re supposed to cure. It’s even worse: more often than not, we are the ones causing it. And it all starts with self-betrayal.

Self-betrayal, the germ that causes self-deception

Self-betrayal is “the germ” that causes the disease of self-deception. As defined by Bud, self-betrayal is an act contrary to what one feels he or she should do for another. That’s a strange definition, not the least because it looks outwardly to explain a seemingly inward act. Yet, the definition is spot on – as you will soon understand from the following example.

Think of the last time you felt you should apologize to someone but never got around to doing it. The discrepancy between your feelings and your actions is obvious. What’s not obvious – but is even more important – is the discrepancy between your sense of what was appropriate and your conduct. They say that your thoughts become words, your words deeds, your deeds habits and your habits character. But what if your thoughts never become words? It is your character that suffers in the end. That’s the essence of self-betrayal.

Now, think of pretty much every action movie made in the 1990s. Really, it shouldn’t be at all difficult to remind yourself of at least one quicksand scene. Close your eyes and put yourself in the shoes of the person who’s fallen and gotten trapped in the quicksand. As you know full well, quicksand liquefies very quickly in relation to the stress it is subjected to: the higher the stress, the more “fluidy” it becomes. Hence, the best way to sink in quicksand is by moving. Incidentally, moving is probably the first thing you’d do if you get trapped in quicksand – that is, of course, unless you had become acquainted with the nature of the problem beforehand.

Self-betrayal works pretty much like quicksand: the more you try to get out of it, the further down you will sink. That’s because your basic assumption – the idea that you can solve the problem by doing something – is painfully wrong. In actual fact, you are a part of the problem. Not because you’ve fallen into the quicksand, but because you’ve never bothered to understand how quicksand works. Yes, we’re still talking about self-betrayal.

The spreading of the disease: the symptoms of self-betrayal

In itself, self-betrayal – much like falling into quicksand or getting stuck in a box – is not a big problem. What you do next might be – and it will probably affect your entire organization. Because once you betray yourself, your brain will be much more interested in finding a justification for your actions, rather than the objective truth; as we said before, that’s simply how our brains work. Mistakes were made, that’s true, but they were not made by you. And even if they were, it was because of some vis major, a superior force; you tried everything to mitigate their effects. This line of thinking kickstarts the infernal machinery of self-deception which, broken down step-by-step, looks something like this:

Getting out of the box

Self-deception makes us selfish and egoistic. It turns us away from the needs and feelings of other people and we stop seeing them as people. Quite conversely, they metamorphosize either into vehicles – that is to say, means by which we can get what we want – or obstacles, that is, possible threats to our success. “In the box,” Bud says, “I’m blind to the truth about myself and others. I’m even blind to my own motivations.” That’s why it is always more convenient to stay inside the box than get out of it. After all, inside the box, we are never the problem: the others are.

The good news is that there is an easy solution to all of this. You see, the very moment you start thinking about getting out of the box, you may already be halfway out of it. If you get trapped in quicksand, you only need to stop moving to realize that you are not the solution, but the problem. The same applies when you are stuck in the box as well: just seeing the problem from the outside as opposed to trying to solve it is a giant step forward. Because, from the outside, it’s not that difficult to see all your self-justifications for what they really are, and recognize your mistakes for what they have been all along! Only from the outside are you finally able to see people for what they should always be: not vehicles or obstacles, but individuals with needs and dreams much like the ones you have yourself.

Even though we feel that “Leadership and Self-Deception” sometimes oversimplifies the complexity of organizational problems, the book is never too wide off the mark in claiming that one cannot overestimate the effects of self-deception on the well-being of an individual or a company.

Moreover, its simple solution to this problem – treating people as people – is, in our eyes, a great solution to numerous other problems, if not most of them. So, kudos for that!

Self-deception determines one’s experience in every aspect of life. So, the moment you notice an incongruity between your thoughts and deeds, stop and act to bridge the gap. Otherwise, you’ll fall prey to your own self-justifications.

Founded by Dr. C. Terry Warner in 1979, the Arbinger Institute is a global training and consulting company. A leader in organizational culture, the Institute has... (Read more)