How We Decide - critical summary review 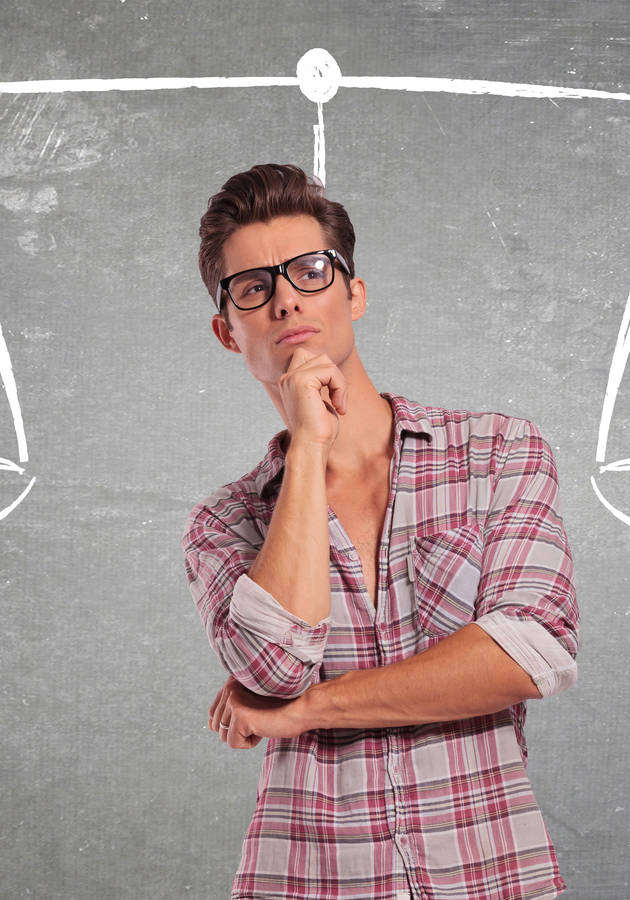 This microbook is a summary/original review based on the book: How We Decide

“How do you know whether something is really what you want to do or just some kind of nerve impulse in the brain?” wonders Don DeLillo in “White Noise,” to which he responds – “Some minor little activity takes place somewhere in this unimportant place in one of the brain hemispheres and suddenly I want to go to Montana or I don't want to go to Montana.”

Jonah Lehrer’s “How We Decide” is a book about those “unimportant” places in your brain hemispheres that make your decisions for you – even when you’re so sure that you’re the one in control.

So, get ready to explore the science of decision-making, and prepare to discover how to fool your brain – into not fooling you!

The quarterback in the pocket

Back in 2002, following a spectacular 14-2 season in which they scored over 500 points for the third year in a row, the talent-laden St. Louis Rams were the overwhelming favorites to win the Super Bowl. Surprisingly, they lost to the New England Patriots, thanks, in large part, to some quality plays from their backup quarterback, Tom Brady. But even then, nobody could guess that Brady would become a Hall of Famer with six Super Bowls to his name and record four Super Bowl MVP awards.

After all, he was a lightly regarded prospect coming out of college which is why he was the 199th pick in the sixth round of the 2000 NFL draft. Back then, the Pro Football Weekly draft report described him as lacking “great physical stature and strength” to succeed in the game. It was right about one thing, though: Brady excelled at decision-making.

It wasn’t just a guess: the NFL has a way to check this, and it’s called the Wonderlic test. Brady’s score: 33. Not that bad, especially because this is twice more than Dan Marino (16) and once and a half more than Brett Favre (22). However, it is certainly not as good as Ryan Fitzpatrick’s 48 (in 9 minutes) or Jason Maas’ 43! But why are Brady, Marino, and Favre the record holders?

Because – according to Lehrer – the Wonderlic test is somewhat flawed, seeing decision-making as something done with the rational part of our brains. However, that is only partly true. Our brain consists of both a limbic (emotional) part and a neocortical (logical) segment, and we use both of them to make a decision. But let’s see how.

The predictions of dopamine

Tom Brady is so good at making the right decisions when in the pocket  – a 3-second window to decide – is because he is capable of deactivating the part that studied and absorbed those decisions at the moment that the game starts. Also, he's capable of remembering thousands of plays before the first whistle.

So, contrary to what Plato and Descartes advocated, it isn’t smart to always think a decision through. When you need to decide in a split second, you should always go with your guts. And you know why? Because your emotions are genuinely empirical and pragmatic as well – after all, they too have evolved during a period of hundreds of thousands of years.

Essentially, we owe our split-second emotional competence to something called “the dopamine feedback system.” The system works by detecting subtle patterns that we’d otherwise fail to notice. First, dopamine neurons “assimilate all the data that we can’t consciously comprehend. And then, once they come up with a set of refined predictions about how the world works, they translate these predictions into emotions.”

This was demonstrated by Antonio Damasio in the Iowa Gambling Task, popularized in his aptly titled book, “Descartes’ Error.” In short, thanks to dopamine releases, people pick up the patterns in a rigged game of cards even though they consciously have no idea what the patterns actually are. People who suffer from orbitofrontal cortex dysfunctions, however, have problems doing this even when the patterns are obvious. The reason: the orbitofrontal cortex is linked directly to emotions and reward systems involved in decision-making processes!

Fooled by a feeling

Unfortunately, our emotional brain is not perfect. On the contrary, in fact: it has developed in such a manner that if you adhere to its imperatives for too long, it will undoubtedly take you on the wrong path. The reason? Well, there are at least three.

First of all, as suggested above, the emotional brain is preprogrammed to see patterns. However, it can be easily fooled by randomness. Gambling streaks or hot hands in basketball are not real: they are just your emotional brain seeing patterns where there are none.

Secondly, the brain is much more interested in avoiding losses than winning. As far as your brain is concerned, “bad is stronger than good,” because even though winning releases dopamine, losing activates the amygdala, which in turn makes you feel fear and anxiety.

Finally, due to the power of dopamine, the emotional brain always favors short-term rewards and disregards long-term costs. Your body fires three or four times the usual amount of dopamine when you win something unexpectedly. This is why you keep gambling even after you’ve lost everything.

The uses of reason

In a nutshell, the emotional brain is great at keeping you focused, but sometimes this can be a problem. Thankfully, the neocortex – the rational part of your brain – is there to help in such moments.

You see, being focused means ignoring many things that don’t matter and dedicating all of your energy only to the ones that do. However, what if you’re focused on the wrong thing in the first place? Well, then it’s almost certain that you’ll make not only the wrong but probably the worst decision as well.

Think of the last time you panicked about something. The most important thing that happened inside your brain was something scientists call “perceptual narrowing”: you started ignoring everything but the thing that made you panic. And this happened quickly: while you felt the earth shaking, one part of your brain told you it might be an earthquake, and another translated this into a significant threat; and a third – your emotional brain – told you to follow the most common pattern for such situations – to run away immediately.

However, your emotional brain is far from correct in its analysis in this particular situation: you can try to run away from a dog or a snake, but you can’t run away from an earthquake. To think straight in cases such as these, you need to be able to quickly regulate your emotions. But how do you do that?

“The answer is surprisingly simple, by thinking about them,”  writes Lehrer. Since “every emotional state comes with self-awareness attached… an individual can try to figure out why he’s feeling what he’s feeling. If the particular feeling makes no sense… then it can be discounted. The prefrontal cortex can deliberately choose to ignore the emotional brain.”

So, in a way, science has vindicated Aristotle who argued, in his “Nicomachean Ethics,” that “the key to cultivating virtue was learning how to manage one’s passions.” Good decision-making is not about not getting angry: it’s about getting angry at the right person and at the right time.

So, panic is the cause of underthinking about things; overthink them – especially if you’ve already mastered them – and you might choke. And that’s only one of the few flaws your rational brain comes with. There are a few others as well.

For example, as far as your brain is concerned, there is such a thing as too much information. Whether you want it or not, your neocortex usually makes a decision based on merely small chunks of data and uses everything else to support the initial decision. This is why you can remember only the last seven things someone says, plus or minus two; anything more than that, and your rational brain feels burdened and goes into approximation mode. Of course, this usually leads to oversimplification and, consequently, mistakes.

Even so, just as your emotional brain is designed to be prejudiced so that it can be focused, your rational brain is designed to be too open so that it can consider more things. However, because of this, it is simply unable to ignore any kind of information, no matter how irrelevant. And this is why it tires easily and why it is rather susceptible to suggestions and ideologies.

The strangest thing about your rational brain, however, is that it is outrageously illogical. Don’t believe us? Allow us to ask you: would you drive 20 miles to save $5 on a calculator worth $15? You probably would. Now, would you do the same to save $5 on a $125 jacket? You probably wouldn’t. But why? $5 is $5 either way. Well, the answer is simple: your rational brain doesn’t think in absolute – but in relative terms. In other words, you are not interested in the truth, but only in the truth that matters – in the present context.

It shouldn’t surprise you that your brain isn’t interested in the truth per se: it is, after all, a survival tool. Precisely because of this, ethics is usually something it is not interested in. We usually make moral decisions with the emotional part of our brains: the prefrontal cortex typically only provides the reasons for our decisions post festum.

In other words, as frightening as it sounds, data does not affect our moral decisions: they are mostly about sympathy. One photograph of a malnourished child will probably inspire you to give much more money to charity than a whole book of very real and frightening facts. Stalin (or whoever said it) was right: as far as our brains are concerned, a single death is indeed a tragedy, but a million deaths are merely stats.

Hence, if you can’t see the people that you’re being unfair to, you will almost certainly have no sympathy for them. That is – unless you force your rational brain to take over the reins of the decision-making process.

The brain is an argument

In conclusion, there’s a constant argument in your head. But that’s a good thing, because when there is none, then you’re a closed-minded person, an ideologue, someone who is capable of rationalizing any fact to fit their system of beliefs.

Since that’s the worst thing that can happen to you, it’s best to encourage inner discord and to try to examine your opinions from time to time. We learn best through trial and error. To minimize the latter, you should follow this two-step strategy:

Despite all the negative publicity surrounding Jonah Lehrer after the 2012 plagiarism and quote fabrication scandal, “How We Decide” definitely has its merits.

And we believe that you’ll find at least parts of it fairly engaging and thought-provoking.

Definitely worth a read.

Contrary to popular belief, it is the easy decisions you should analyze through; for difficult ones – go with your gut!

Jonah Lehrer is an American author. A Rhodes scholar, he had published three bestselling nonfiction books before turning 30 – “Proust Was a Neuroscientist,” “How We Decide,” and “Imagine” – and was widely considered a... (Read more)

More books on Science and Psychology