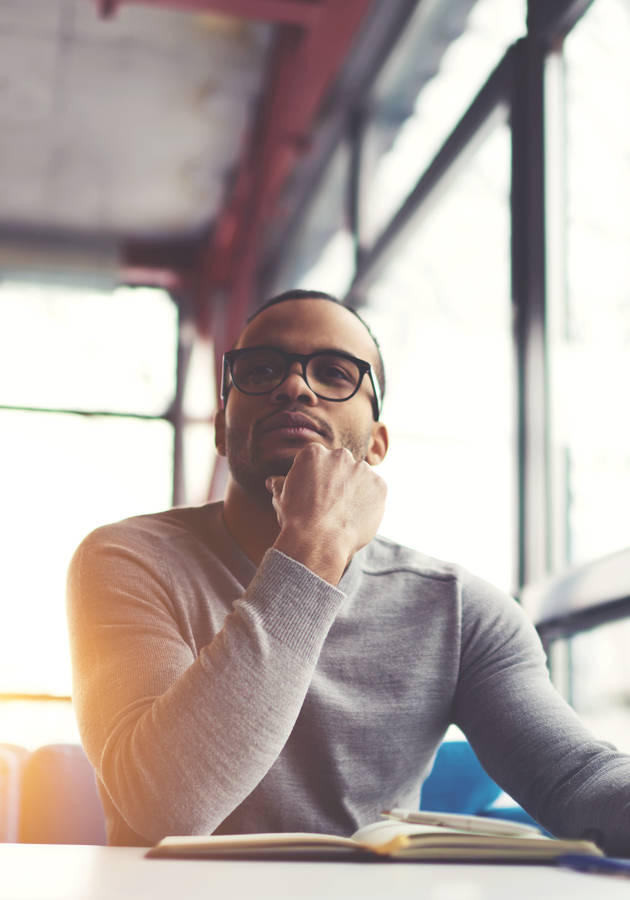 This microbook is a summary/original review based on the book: As a Man Thinketh

First published in 1902, “As a Man Thinketh” by James Allen is sometimes referred to as “the original bestseller.” This might seem like quite the burden for a slender pocket edition, but the book has shown no signs of wearing out even after carrying it for more than a century. It is still widely read, and it continues to inspire admirers and epigones too many to even number.

It’s quite easy to sum up “As a Man Thinketh,” not least because it has been by numerous other authors. Based on the idea that every human being has a substantial – if not total – responsibility for the events that happen to them during their life, the book offers a few pieces of advice on how to improve yourself and, consequently, your fate. Conveying Allen’s style is, however, far more difficult. Sometimes epigrammatic and occasionally even scriptural, it is never less than dramatically poetic and always more than potent to strike a chord in his readers’ hearts and souls.

Unsurprisingly, we couldn’t resist scattering a few quotations more than usual in our microbook. So, get ready to discover what makes “As a Man Thinketh” so popular – both from a philosophical and a stylistic perspective!

Most dictionaries define “character” as, simply, the aggregate of attributes or features distinctive to an individual. Most scientists – whether psychologists, biologists, or anthropologists – think of it as something multifaceted and difficult to pinpoint. How much of it is determined by our genes, and how much by traumas experienced in early childhood? How much is the direct result of parenting and education, and how much of the books we’ve read and the movies we’ve seen?

In the opinion of Allen – a British lay philosopher of the turn of the 20th century – these are all the wrong questions and assumptions. For him, character is something much less abstract and much more malleable than they make it to be – namely, the complete sum of one’s thoughts. In other words, “a man is literally what he thinks,” and the Biblical saying from Proverbs 23:7, “As a man thinketh in his heart so is he,” “not only embraces the whole of a man's being, but is so comprehensive as to reach out to every condition and circumstance of his life.”

We are what we make ourselves to be. If we think the right thoughts and apply them in the right way, we may even obtain what the author refers to as “Divine Perfection.” However, “by the abuse and wrong application of thought,” anyone can descend below the level of the beast. These are the two extremes, between which all grades of human character exist. And we are their makers and their masters.

Effect of thought on circumstances

According to Allen, our mind may be likened to a garden; and just like any garden, it can be either intelligently cultivated or allowed to run wild. Either way, it must – and will – bring forth. To paraphrase the Bible yet again, a man reaps what he sows – it’s foolish to expect triumphs and conquests if you leave your mind-garden unattended or put useless weed seeds in it!

The analogy reminds one of Voltaire’s advice at the end of “Candide”: one must cultivate one’s own garden. Much like the French philosopher, Allen too believes that we must take full responsibility for our lives, claiming that all the events and circumstances that befall us in the present are the direct result of our past thoughts, desires, and choices. This, he declares, is the law of thought, one of the fundamental postulates of existence: our thoughts inevitably become our character, and our character comes to be our destiny.

“The soul attracts that which it secretly harbors, that which it loves, and also that which it fears,” Allen writes. “Circumstances are the means by which the soul receives its own.” In other words, we are not shaped by the world; it’s the other way around: our world is shaped by us. Rather than making you, circumstances purely reveal the real you to yourself. If they are bleak, that means your thoughts and character are bleak as well; if your life feels like a musical, that means your thoughts are pleasant and harmonious.

Allen illustrates this simple equation even more poetically: “The world is your kaleidoscope, and the varying combinations of colors, which at every succeeding moment it presents to you, are the exquisitely adjusted pictures of your ever-moving thoughts.” Therefore, if you want to improve your circumstances, you should improve yourself; otherwise, you’ll remain bound to a life you never wanted.

Effect of thought on health and the body

For Allen – just like circumstances – disease and health are also rooted in thought. “The body is a delicate and plastic instrument,” he writes, “which responds readily to the thoughts by which it is impressed, and habits of thought will produce their own effects, good or bad, upon it.” Put another way, “sickly thoughts will express themselves through a sickly body,” whereas “sweet and sunny disposition” will grant you the innocent face of a teenager even in your declining years.

“Thought is the fountain of action, life, and manifestation,” claims Allen. “Make the fountain pure, and all will be pure.” Meaning that if you want to build up your body in vigor and grace – changing your thoughts will help you much more than changing your diet. Only clean thoughts lead to clean habits – even the cleanest habits if rooted in an unclean mind, quickly dry up and wither away.

So, if you want to protect and renew your body, protect and beautify your mind first. “There is no physician like cheerful thought for dissipating the ills of the body,” concludes Allen. “There is no comforter to compare with goodwill for dispersing the shadows of grief and sorrow.”

The thought-factor in purpose and achievement

“Until thought is linked with purpose there is no intelligent accomplishment,” writes Allen straightforwardly. “All that a man achieves and all that he fails to achieve is the direct result of his own thoughts.”

Everyone experiences self-doubt. But it’s not a coincidence that those who achieve success are better at overcoming it: failure is rarely a consequence of lack of preparation and almost always the direct result of fear and reluctance. “He who has conquered doubt and fear has conquered failure,” declares Allen confidently. “His every thought is allied with power, and all difficulties are bravely met and wisely overcome. His purposes are seasonably planted, and they bloom and bring forth fruit, which does not fall prematurely to the ground.”

In life, you’ll find yourself at a crossroads hundreds of times. The only way to know which road to take when that happens is if you know where you’re going beforehand, that is if you have a clear purpose. If you make an effort to convince your mind that your final destination is a place of bliss and delight, then your mind will help you make the right decision every time. If you don’t, then prepare to wander aimlessly through life, looking for things you’ll never find.

For Allen, “They who have no central purpose in their life fall an easy prey to petty worries, fears, troubles, and self-pityings, all of which are indications of weakness.” And weakness inevitably leads to failure, unhappiness, and loss. If two equally prepared and equally strong fighters, the one who’ll win is the one who’ll doubt their triumph less. Thoughts of uncertainty and fear never accomplished anything – and never will. Conversely, thoughts of self-belief and confidence are the thoughts of winners and champions.

According to Allen, “the dreamers are the saviors of the world.” More than a century before him, an English Romantic poet by the name of William Blake aptly remarked that “what is now proved was once only imagined.” Allen shares this belief wholeheartedly, claiming – yet again quite lyrically – that “the greatest achievement was at first and for a time a dream.” He then goes on: “The oak sleeps in the acorn; the bird waits in the egg; and in the highest vision of the soul a waking angel stirs. Dreams are the seedlings of realities.”

Many things that seem commonplace to you today – everything from printing presses to planes to smartphones – were once just visions in the mind of a few solitary dreamers. Not few of them were ridiculed for their impractical or unreasonable ideas; some lost all their money trying to make them reality; a handful even died defending the usefulness of their visions.

What all of them knew – and we tend to forget in the hopelessly practical world of nowadays – is that a man is nothing without ideals and dreams; and that everything visible and tangible today was once invisible and camouflaged in the form of a supposedly unrealizable idea. Put in the simplest terms possible, we live in past visionaries’ dreams. “Composer, sculptor, painter, poet, prophet, sage, these are the makers of the after-world, the architects of heaven,” Allen states. “The world is beautiful because they have lived; without them, laboring humanity would perish.”

More than just calling for eternal remembrance of these creative thinkers, Allen also advocates for following in their footsteps. “Cherish your visions,” he advises. “Cherish your ideals. Cherish the music that stirs in your heart, the beauty that forms in your mind, the loveliness that drapes your purest thoughts, for out of them will grow all delightful conditions, all heavenly environment; of these, if you but remain true to them, your world will at last be built.”

Serenity is the final piece of the puzzle. It isn’t enough just to dream lofty dreams and bend reality to their power, it’s also essential that you provide the perfect environment for their growth. To paraphrase another Romantic poet, William Wordsworth, only spontaneous feelings are powerful, but they must be recollected in tranquility if you want to make something out of them. In Wordsworth’s case, this “something” was poetry; in Allen’s – it is nothing less than life itself.

“Calmness of mind is one of the beautiful jewels of wisdom,” he writes. “It is the result of long and patient effort in self-control. Its presence is an indication of ripened experience, and of a more than ordinary knowledge of the laws and operations of thought.” No wise man was ever impatient or anxious – only those whose thoughts are serene, purified, and controlled can make the winds and the storms of the soul obey them.

Published more than a century ago, “As a Man Thinketh” is more a literary essay than a scientific study. Either way, it’s a classic of the self-improvement genre and a founding text of the New Thought philosophical movement.

Described by its author as “a book that will help you to help yourself,” “As a Man Thinketh” is also one of the first consciously self-help books ever written; it is still one of the best as well.

Train your brain to think happy thoughts – it will change your life in unimaginable ways.

James Allen was a British writer, best known today as one of the pioneers of the self-help movement. His first two books went largely unnoticed by the public, but his third one – “As... (Read more)