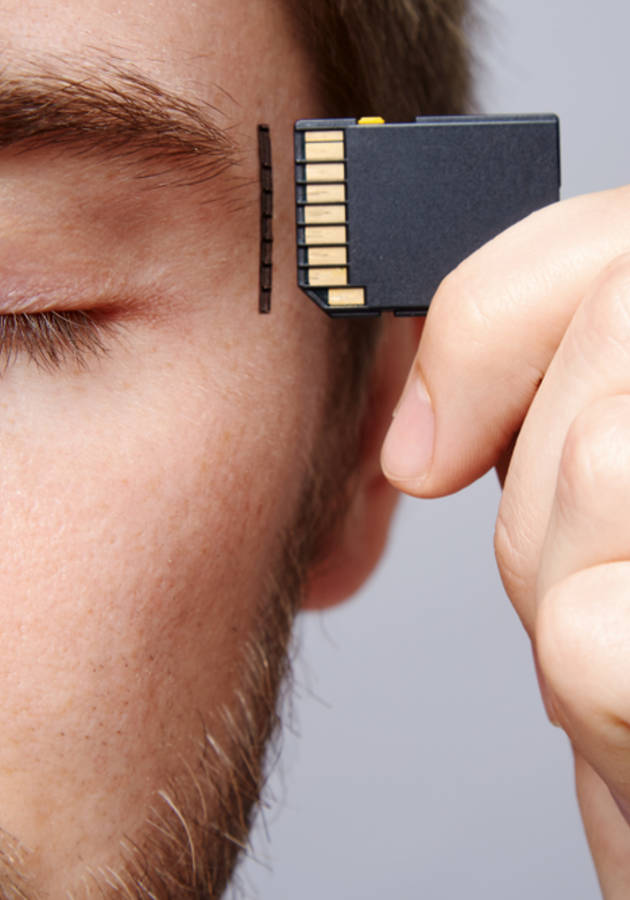 This microbook is a summary/original review based on the book: Unlimited Memory: How to Use Advanced Learning Strategies to Learn Faster, Remember More, and be More Productive

Remember that time you talked to that friend about the differences between short-term and long-term memory? You probably don’t! We don’t blame you, we can hardly remember what we had for lunch yesterday. The book for today – appropriately titled “Unlimited Memory” – is written by someone who remembers not only all of his last week’s meals but also about 10,000 digits of Pi!

Kevin Horsley is a professional speaker, learning assistant, an International Grand Master of Memory, and twice a Memory World Record holder. He’s right when he says that whether it is because of tomorrow’s exam or because of your wife’s anniversary, “memory is the cornerstone of our existence. It determines the quality of our decisions and, therefore, our entire life!”

Fortunately, like so many other things, memory isn’t something we’re born with, but a tool that can be sharpened. Therefore, Horsley’s very actionable book offers many different ways on how you can do this.

Let’s have a look at the most attention-grabbing ones.

Nothing is more important than concentration

Your memory’s been failing you lately? Or, worse, ever since you can remember? If you answered “yes” to at least one of the questions, according to Horsley, it is most likely your fault.

If you want to become a great athlete, nobody would be able to convince you that you can achieve this by not training daily. You don’t just wake up one morning and expect to be allowed to do surgeries. Evento find yourself a nice home, you spend weeks or months browsing the internet and visiting houses.

Then, how is it that you expect to have a great memory just like that?

No matter what people say, your memory competence is not God-given. You need to acquire it through well-designed and time-tested methods, not to mention months, even years, of practice. Moreover, it all starts with concentration.

“Concentration,” writes Horsley in one of the most interesting definitions of the word you’ll ever read, “is made up of many small choices consistently practiced.”

The meaning of it?

Concentration is not an abstract entity but the result of your choices. In other words, it is wrong to say that you don’t have concentration. The truth is: you’ve made the wrong choices when you could have made the right ones.

“The best advice I ever came across on the subject of concentration is: ‘Wherever you are, be there,’” said once American entrepreneur and motivational speaker, Jim Rohn. Horsley couldn’t agree more. Furthermore, he has four pieces of advice for you based on this idea:

1. Take control of your inner voice.

We all have a little inner voice, and unfortunately, none of us can resist it. Consequently, it has a massive influence on our concentration and our lives.

It’s likely that, in some not too distant future, humans will evolve to be able to multitask, but, at least for now, it is a myth and does no good. According to neuroscientists, multitasking both slows your brain by half and increases the chances of making a mistake.

The main culprit for this? Facebook. Twitter. Instagram. In other words, it’s not that you don’t remember well. You’re just not concentrated enough to first learn the things to recall them later.

Most of us are usually incapable of directing our minds appropriately. In other words, when we approach any type of information, only rarely do we know what we want out of it.

Horsley has a solution to this problem: the PIC method:

Purpose: You can’t concentrate on anything unless you have given yourself a goal to be interested and curious about it. Purpose-driven activities are the only ones that make sense to our brain. So, don’t start learning French just for the sake of it. Start learning the language, because you want to read Victor Hugo’s “Les Misérables” as it was originally written!

Interest: “Your mind never wanders away,” notes Horsley. “it only moves toward more interesting things.” That is, your mind is alert, disciplined, and focused on the things that are highest on your interest list; it tends to hesitate and procrastinate about the other stuff. So, get interested in things (you can force yourself to do that), and your brain will start remembering them.

Curiosity: As Tony Robbins suggests, curiosity is the ultimate cure for boredom, and there are so many things to be curious about. So, stop asking yourself questions such as “Why do I have to read this book?” and start asking something more instigating, such as “How will this help me? How will this information make me more significant?”

“Eliminating worry” is the final topic Horsley suggests you should do before you start applying his memory methods, and start your journey toward becoming a Memory Master. The reason is compelling because, just like memorizing, worrying is a very creative engagement, and you don’t need anything taking up the available resources.

Almost all worries are the product of “what if” questions and are movies that you direct and edit yourself. Instead of inquiring this, start asking yourself “what would I do” questions. That, alone, hinders creativity makes the process of worrying more rational, and it results in more peace. “Learn to practice peace because if you have no attention, you have no retention,” concludes Horsley.

To memorize, you need to be creative and connect things

Now that you’re concentrated enough to memorize things, it’s time to start learning how to memorize them the right way. Because there’s still some way to go from being focused to remembering stuff. As always, a little creativity helps.

The SEE principle helps you remember better because it actively engages the full potential of your brain. The three letters from the acronym stand for senses, exaggeration, and energize. They sum up the process by which you should remember things from now on in general.

There are only five ways to engrave anything into your brain, and these are the five senses: sight, sound, smell, touch, and taste.

The more of them you include, the better you remember things. Smell, sight, sound, taste — everything helps.

What is easier to remember, a regularly-shaped potato or a potato-shaped like Jesus’ abs?

Well, use this to your benefit: exaggerate in the face of logic. If you can, overstate with humor as well. The more illogical and amusing your images are, the less likely you’ll ever forget them.

To energize is to give your static images some action. Action makes everything more interesting. Just think of it in this way: would you rather watch a slideshow or a movie of your holiday? Even better, is it more engaging for your imagination to watch a horse standing still or one that gallops through a field?

Use your car to remember: The method of loci.

“OK,” you may say, “I don’t have any problems remembering images of isolated things.” How about lists of things? It has to be a bit more complicated than using the SEE method. You should still SEE things to remember them, but the more of them are, the better it is to place them somewhere.

The reason is simple: evolution is hardwired into your brain. Ancient men were particularly good at remembering routes. They had no choice, in the absence of Google Maps, that was the only way for them to be sure that they were not going to get eaten by a lion or be left behind by their tribe.

Tips follow so you can memorize a list. First, in your imagination, place each of the items on the list (transformed through the SEE method) in different rooms of your home. Walk around the rooms, picking item after item, one by one.

Lists are abstract, but routes are very concrete. As your mind has been trained by evolution to remember routes much better than abstract concepts, by creating points of reference for each item of your list, you’ll recall the list of items as well. Horsley remembered 10,000 digits of Pi by using this method.

Memory masters used rhymes the same way we use clothespins! Called clothes pegs by the British, which is why the method we’re about to introduce you to is called “the rhyming peg method.”

Since numbers are abstract things, we don’t remember them as well as we remember images. Rhyming pegs are an excellent way to circle round this evolutionary shortcoming.

Horsley’s rhymes for the numbers from one to 10 are the following:

The more real the items on your list are, the easier it will be for you to remember them. You can extend the method by finding more words that rhyme with the number (e.g., sun, tum, gum, and gun). However, the most important thing is to etch these rhymes to your long-term memory. After all, they are the pegs.

“If you want to remember names like a memory master,you have to focus on the four Cs,” writes  Horsley.

Don’t leave it to chance whether you’ll remember someone’s name or not: concentrate. Repeat it out loud after you hear it, and, if it is a tricky one, ask the person in question how to spell it.

Just like feelings and numbers, names are abstract things as well, so you have to create an image for the name in your mind if you want to be able to recreate it later. It’s okay if you have to think hard about this one because “we only remember what we think about.”

Some of the names just naturally create an image. The author’s surname, for example, is Horsley, so you can picture Bruce Lee on a horse. His first name is Kevin, which sounds similar to “cave in,” so you may imagine Bruce Lee falling from the horse or surrendering. How can you ever forget that?

“All learning is creating a relationship between the known and the unknown,” reminds us, Horsley. So, don’t just let the image float in some deserted area of your brain. Connect it to something you know: the face of the person, some of their traits that you’re bound to remember, like a gesture or clothes.

Whatever the method you end up using to connect the image created through concentration and imagination, make sure you revisit this connection from time to time. Even if you’re capable of remembering everything, you’re bound to forget all of it in two years unless you repeat it. After all, it’s not like you remember anything from high school.

“Unlimited Memory” is a book filled with loads of practical advice.

Therefore, no theory here and no complicated factsheets. Many of the strategies work: while reading, try at least some of them, and don’t complain (challenge yourself not to be tempted to do so). When these methods result in something as essential as memory boosting, you’ve got to give the author more than just the usual credit.

Kevin Horsley has been analyzing the mind and memory for over 20 years. He is an International Grandmaster of Memory, and twice a Memory World Record holder for “The Everest of memory test.” Horsley is a professional speaker, learning assistant, and author... (Read more)