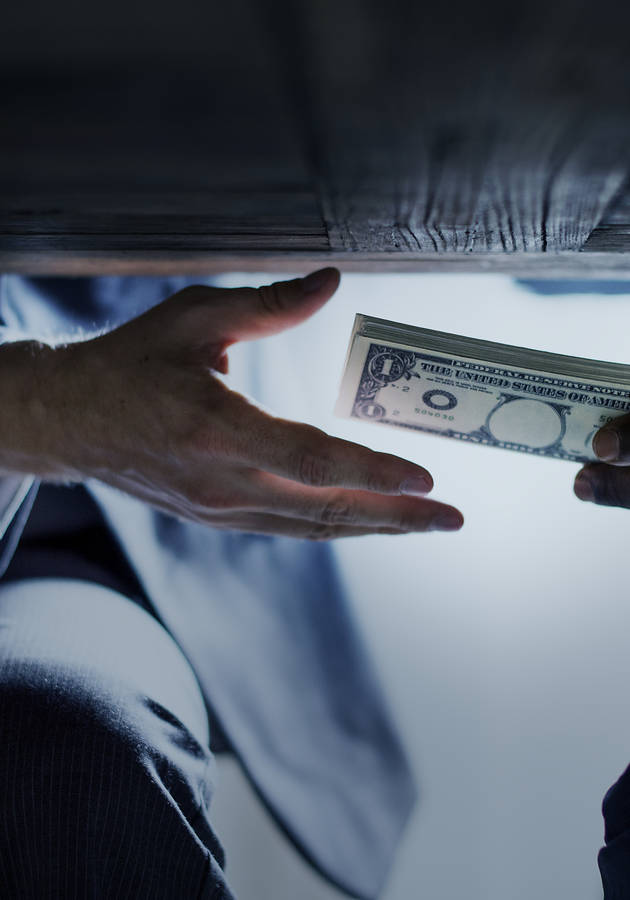 This microbook is a summary/original review based on the book: Profiles in Corruption: Abuse of Power by America's Progressive Elite

Peter Schweizer is an American investigative journalist whose stunning political revelations rarely fail to impress and almost always produce the desired legal effects. Many of his previous books have launched FBI and congressional investigations, and “Profiles in Corruption” promises something similar. In it, Schweizer turns his focus to eight of America’s leading progressives. It turns out that – despite making careers out of blaming capitalism for generating corruption and collusion – they too have exercised power and dishonesty during their rise to prominence while forming “entangling alliances” with suspicious financiers and foreign governments.

So, get ready to discover how the champions of other people’ rights bend the law to their benefits, and how the protectors of the poor secretly get rich and advance their own interests!

Kamala Harris is widely admired in progressive circles, and has been called “a gritty lawyer,” “smart on crime,” “defender of the rights of the downtrodden,” and even “the female Obama.” “The reality of her rise to prominence is far more complicated,” Schweizer writes, “and how she has leveraged her power along the way is troubling.”

First of all, Harris’ elevation to national politics is “closely tied to one of California’s most allegedly corrupt political machines.” In fact, the very beginnings of her career can be linked to this connection.

In 1994, Harris began dating controversial politician Willie Brown, at the time the second-most-powerful man in California. Six years later, he became San Francisco’s mayor. And, in 2003, he helped Harris get elected as the district attorney for San Francisco. Even so, “perhaps the most important thing Brown gave Harris was access to his vast network of political supporters, donors, and sponsors.” They started sending Harris money; in return, she started helping them out of legal troubles.

This is where things get extremely problematic, even disturbing. In addition to covering up information concerning major allegations of corruption, Harris might have even suppressed evidence in relation to child molestation within the Catholic Church. Her predecessor, Terence Halligan, had already started pursuing legal cases against the San Francisco archdiocese, but a few donations to Harris’ election campaign made them all disappear. In the words of Schweizer, despite serving as San Francisco district attorney from 2004 to 2011 and as California attorney general from 2011 to 2017 – Harris never brought a single documented case forward against an abusive priest. “Why?” suddenly becomes a rhetorical question, doesn’t it?

Joe Biden – vice president of the United States from 2009 to 2017 – entered America’s political life in 1972. Shortly after, he earned a reputation as a gritty working-class hero. Besides, he became famous for his insistence to never discuss the business activities of his family members – with them or the press. Yet, it’s difficult to argue that the enrichment of the Biden family isn’t directly linked to his enormous political influence.

For example, political messaging firm Joe Slade White & Company received large fees from Biden presidential campaigns of 1988 and 2008 – both ran by Joe’s sister, Valerie. It’s more than a coincidence that Valerie is one of the firm’s only two executives. Investment consultancy StartUp Health was launched in 2011 in the Oval Office before the company even had a website. Curiously, its chief medical officer Howard Krein happens to be married to Biden’s youngest daughter, Ashley.

Perhaps most damningly, Hunter Biden can be linked to two billion-dollar deals with Chinese government-connected companies made during his father’s visits to China as a vice president. Another coincidence? Moreover, won’t these company deals affect future U.S.-China relations?

Cory Booker is “a rock star senator with a cultivated persona, heroic mystique, and a crowd of celebrity friends.” A vegan and a Rhodes scholar, he has no known vices or addictions other than coffee. Oprah Winfrey has described him as the definition of a servant leader, and Vogue magazine as an urban superhero. Too perfect to be true? You bet it is!

Booker’s virtuous public image is the result of a carefully managed public relations campaign. For example, remember the stunt that won him an upset victory for a seat on the city council of Newark in 1998? If you don’t, this is the short version: he lived in a tent in a crime-ridden area of Newark to draw attention to urban development issues. This was described as a self-sacrificing act by the media, but in reality, the tent was “ballroom size” and Booker seldom stayed in it overnight.

A closer look at Booker’s political ascension reveals far worse deeds than misleading the media to safeguard his image. Just like all politicians, he too has leveraged his power for the benefit of his friends and supporters. And because – just like all politicians – he, too, has accepted money from all kinds of sources for his campaigns, the beneficiaries of his political actions are often suspicious people. Go no further than the fact that Booker appointed a certain Pablo Fonseca as his first chief of staff after becoming a mayor. That wouldn’t have been bad if Fonseca hadn’t been “an operative for notoriously corrupt and future convict Sharpe James.” You can do the rest of the math yourself.

In 2012, American lawyer Elizabeth Warren became the first female U.S. senator from Massachusetts. Five years later, she won reelection and, in 2019, announced her candidacy for president. In the meantime, Michael Moore portrayed her as a hero in his documentary, “Capitalism: A Love Story,” and her claim that capitalism is an evil that cannot be regulated became a meme in some left-wing circles.

Well, it’s a little different if you are in a position to benefit from this “unregulated evil.” In 2006, in an interview with the Public Broadcasting System (PBS), Warren harshly criticized by-then bankrupted company LTV Steel for treating its employees like towels – using them and throwing them away. However, about a decade and a half earlier, in one of her earliest cases, Warren was paid $10,000 by this very same company, which was seeking release from the 1992 Coal Act that required them to pay health benefits to retired coal workers.

And that was just the start: Warren has also done paid legal work for Fairchild Aircraft Corporation, the Southwest Electric Power Company, and Dow Chemical – and every time she sided with the corporations, trying to help them avoid their responsibilities toward their employees. Of course, she now claims otherwise.  But, likewise, she claimed to be a large part Cherokee to win minority positions and advance through her career – when, in fact, she might be as little as 1/1024th Native American.

Sherrod Brown, senator from Ohio since 2006, views himself as “a progressive before it was cool.” He has been quoted claiming that, as a politician, he’s found in the middle of “a 100-year battle between the privileged and the rest of us.” In truth, not many people have been as privileged as him. Consequently, his knowledge of the working class comes not from experience but from reading Leo Tolstoy’s “Resurrection” – at Yale!

More importantly, the people he claims to represent would probably do a lot better without his help. Following the money trail, Schweizer reveals that few American politicians have received more financial support from labor union political funds than Sherrod Brown. As a result, whenever union workers have some problems with union leaders, Brown works to solve them, especially those related to the pension crisis. Guess whose side he is on – the workers he doesn’t even know or the leaders who regularly give him money?

Starting with the very obvious, he is a millionaire who rails against other millionaires. He is also a prolific author who has earned hefty advances for most of his books; their bestselling status has earned him additional hundreds of thousands of dollars. To hide the book royalties, he delayed releasing his tax returns during the 2020 presidential race, dismissing criticism for his wealth by claiming that anyone who can write a bestselling book can become a millionaire, too.

In 2016, Sanders and his wife Jane bought a lakefront summer home in North Hero for over half a million dollars. It was their third house. The move came soon after Sanders chided the rich for owning more than one car.

Perhaps an even more serious case of hypocrisy is Jane Sanders listing herself as a media buyer for her husband’s reelection, despite no apparent background in media buying. The kicker: the media buyer commission is not disclosed anywhere and is usually about 15% of the cost of a media campaign. According to one of Bernie’s financial disclosures, Jane makes more than $1,000 as “a self-employed antique dealer.” But there are no antique businesses registered to her name in Vermont.

According to Scweizer, “despite a voting record remarkably similar to Bernie Sanders,” Minnesota’s senior Senator Amy Klobuchar has enjoyed “the sort of corporate cash flow about which the senator from Vermont could only dream.” In fact, Klobuchar is “unique among progressives in her ability to raise enormous sums from giant corporations.” Just for her reelection in 2018, she raised 38 times the amount of her Republican challenger, receiving donations from 11 of Minnesota’s 25 largest corporations.

It’s obvious how. As chief prosecutor of Hennepin County, Klobuchar avoided prosecutions of serious illegal operators and severely punished small white-collar criminals. Case in point: Tom Petters, a man currently convicted for running the second-largest Ponzi scheme in U.S. history. Curiously, Petters wasn’t charged because of Klobuchar’s efforts – but despite them. Reports suggest that she might have caught Petters committing fraud, but didn’t prosecute him. Yes, of course he was a donator!

Eric Garcetti made the headlines in 2020 after shutting COVID-19 testing sites as a punitive reaction to protests against police brutality. But, then again, he has been making headlines for a while now, as allegations of his corruption as a mayor continually resurface.

Just as Klobuchar, Garcetti is exceptional at collecting large sums from big corporations while criticizing big money in local politics. Between 2009 and 2017, he received almost $32 million in largely unregulated “behested payments” sent to his nonprofit organizations. True, he’s merely using a loophole in California laws, but so are his investors. Coincidentally, in return for their money, most of them “have won sizable contracts and crucial approvals from the city in recent years.” And some of them aren’t just big corporations – but convicted money-launderers and bribers!

The cleaner on the surface, the more interesting the politicians seem to Peter Schweizer. If “Profiles in Corruption” is any indication, he might be correct in feeling this way.

Carefully researched and heavily footnoted, the book reveals what a few people in power don’t want you to know – which is why you have to hear it!

Schweizer has been fighting corruption for decades now. One can only hope that he never stops.

Be wary of all career politicians – particularly the ones who claim to work for your wellbeing. To quote Schweizer, “why trust someone with more power when you cannot even trust them with the little they already have?”

Peter Schweizer is an American investigative journalist, the president of the Government Accountability Institute, and the senior editor-at-large of Breitbart News. His books on insider trading, “Throw Them All Out” and “Extortion,” prompted passage of the... (Read more)