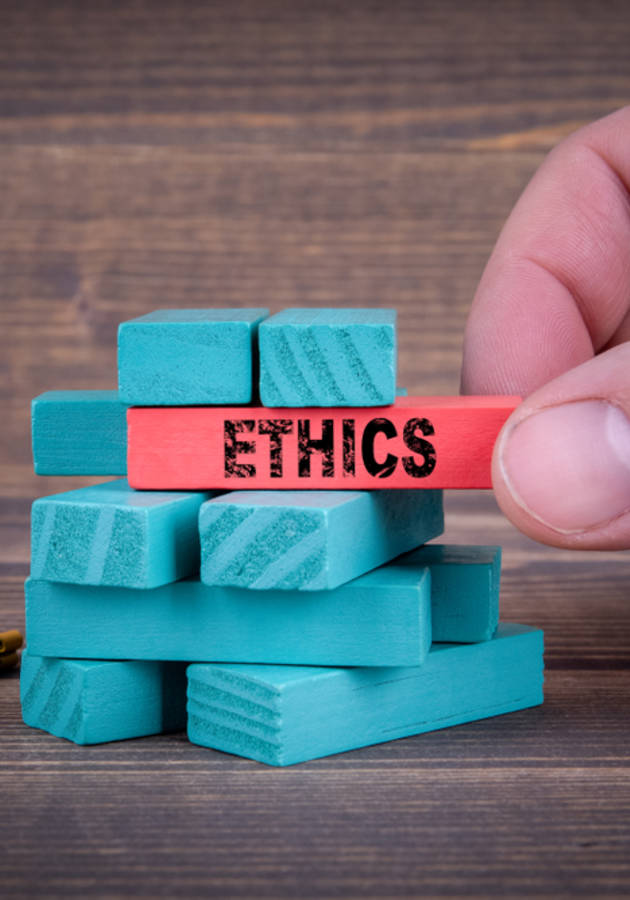 Aristotle was an Ancient Greek philosopher, together with his teacher Plato, the most influential thinker in the history of Western civilization.

He studied under Plato in his Academy for two decades between the ages of 17 and 37, after that he left Athens to tutor Alexander the Great. Even though he was Plato’s best student, after Plato’s death, Aristotle shifted from Plato’s idealistic teachings to empiricism.

If you need to read just one philosopher in your life, then it has to be either Plato or Aristotle.

And if you need to read just one book by the latter, then it has to be the Nicomachean Ethics.

Among other things, Aristotle contributed to numerous different fields – from physics to metaphysics, from logic to ethics, from biology to zoology, from politics to economics, from poetry to music – and almost every single thing he has written is still a subject of academic debate.

When it comes to ethics, it doesn’t get any better than giving this book a nice read.

The Burden of Ethics

The Nicomachean Ethics is Aristotle’s best-known work on ethics and, quite possibly, the most influential book on the subject ever written.

It consists of ten books – all of them originally written as separate scrolls – and is based on Aristotle’s notes from his lectures at the Lyceum, the ancient university founded by the great philosopher in Athens in 334 BCE.

The “Nicomachean” part of the title refers to Aristotle’s son Nicomachus, to whom (quite probably) the work was dedicated. It is also possible that he was the one who edited it. Some scholars, however, claim that the Nicomachus that Aristotle dedicates this work to is actually his father, who had the same name.

Be that as it may, Nicomachean Ethics deals with a problem both Plato and Socrates were interested in – how should men live their lives in the best possible manner.

According to Aristotle, Socrates had shown first that this is not a question to be dealt merely from a theoretical perspective, but one which is more specifically a practical matter.

For that reason, Nicomachean Ethics goes beyond explaining what is good and why is it good and also advises about how a person should live to consider their existence here on Earth as good, respectable, and virtuous.

But we’re running ahead of ourselves.

Let’s walk you through each of the ten books.

“If there is some end of the things we do, which we desire for its own sake, clearly this must be the good,” Aristotle writes at the beginning of Nicomachean Ethics.

And then he ponders: “Will not the knowledge of it, then, have a great influence on life? Shall we not, like archers who have a mark to aim at, be more likely to hit upon what we should? If so, we must try, in outline at least, to determine what it is.”

So Nicomachean Ethics is about discovering what the-thing-humans-desire-for-their-own-sake is and how should they act to most easily attain it.

After a lengthy analysis, Aristotle concludes that whatever we would like to have – money, cars, football or sex – we like it because it makes us happy. OK, maybe those examples were examples by our own, not by Aristotle.

However, as anyone can easily deduce, some of the things that make us happy tend to make us unhappy afterward. Why? Simply put, because they are not good.

So, to sum up, Aristotle says that many things can lead to temporary happiness, but only virtuous actions lead to a happy life. Since this is something everybody wants, then it’s necessary to discover what virtue means and how should one reach it.

In the second book, Aristotle points out that, just like a lyre-player, no matter how talented, must learn and practice to become a virtuoso, a man, no matter how naturally inclined towards virtuous actions, needs the education to attain the proper, virtuous habits.

And then Aristotle lays out the simplest definition for virtue: treading the middle way between two extremes.

What does that mean? It means that anything in excess or lacking is bad and that everything in just the proper amount is a virtue.

Or to use a famous example:

Anyone can get angry — that is easy — give, or spend money. But to do this to the right person, to the right extent, at the right time, with the right motive, and in the right way, that is not for everyone, nor is it easy.

At the end of Book II, Aristotle lists many character virtues and, starting with Book III, analyzes many of them in-depth.

But he explains first, foreshadowing Sartre, that you’re responsible for almost everything you do because you always have a choice not do it (Sartre would add: “Even if the latter leads to death”).

If that is the case, then even ignorance (not knowing what is good) is not really an excuse, because you always have a choice to learn.

So, more or less, Aristotle says that if you’re not ignorant, it’s your fault for not having read his book.

And then he proceeds to explain what he means when he says that we should tread the middle way.

The two examples that he uses in this book are courage and temperance.

Courage, according to Aristotle, is the mean between fear and confidence. In excess, it leads to fearlessness and overconfidence, both of which are bad; if deficient, it leads to cowardness, which is also bad.

Temperance is the mean between pleasure and pain. In excess, it leads to wastefulness; in deficiency, it makes a man insensible.

Book IV deals with the second set of virtues, subdivided in four groups of two.

Generosity may lead to wastefulness, once again, if in excess, and to stinginess if lacking. Magnificence leads to vulgarity and tastelessness when excessive, and to paltriness if not enough.

The second group of virtues is composed of magnanimity and ambition.

Magnanimity is located between vanity (in excess) and smallness of soul (deficiency), and ambition is located between, well, over-ambitiousness and lack of ambition. Sorry, guys, nobody has thought of better words for now.

The third group of virtues is composed of gentleness and friendliness.

Too much gentleness leads to irritability, and, not enough of it, to spiritlessness (they really need to find better words). Too much of friendliness leads to either flattery (if for own advantage) or obsequiousness (if for no purpose).

The final group of two virtues analyzed here is composed of truthfulness and wittiness.

Aristotle says that justice, the highest of virtues, deserves a whole book, which is why Book V deals with every single aspect of what it means to be a just person living in a just society.

Why should Aristotle deal with just societies in a book about ethics?

Because, as he explains, justice is not exactly a virtue for isolated individuals, it’s not anything in that case. Justice can only be made sense of in a community.

Now, If you know anything about Plato and Aristotle – or about how much you liked your teachers in high-school – you already know that, in describing his ideal community, Aristotle is almost explicitly criticizing Plato’s Republic.

Unlike Plato, Aristotle doesn’t think that a just society is a strict hierarchy ruled by a benevolent dictator, but something that is built around the values of equality, commensurability, and proportion.

In Book VI, Aristotle enumerates the five types of stable states of the soul (hexeis, or hexis, in singular), which can be considered intellectual virtues:

#1. Art – making things in a way that can be explained;
#2. Knowledge – axiomatically graspable concept: “all knowledge seems to be teachable, and what is known is learnable."
#3. Practical Judgment – judgment used in making good decisions upon overall actions (when specific, it is art)
#4. Wisdom – a combination of common sense (nous) and knowledge; it only belongs to the wise; however, we don’t need it, since we have:
#5. Common sense – or intellect, it deals with unarticulated truths and is what helps us perfect our virtues.

If one is virtuous only when treading the middle road, then self-restraint is a very important value one must learn to acquire.

It is something that must be promoted by the laws of a country, so lawmakers should truly understand the essence of pleasure, pain, and self-restraint as well.

The good news: self-restraint is not a vice and can be taught.

In other words, practical guides for self-mastery are as old as time.

“Without friends,” writes Aristotle, “no one would want to live, even if he had all other goods.” This quotation synthesizes the reason why Books VIII and IX are dedicated to the topic of friendship.

There are three types of friendship according to Aristotle: useful, pleasant, and complete.

The complete friendship is the one everybody should strive for – friends are capable of seeing what is likable in each other.

Unequal friendships, on the other hand – whether between rulers and subjects, or dominant and submissive people – are not friendships. Unjust societies hinder the possibility for real friendships.

Still on friendship. If you’re in a bad one, then you’re probably expecting from the other person things that they cannot offer, and/or vice versa.

If that is the case, you’ll never be satisfied, and it’s better that you break off the bond as soon as possible.

Of course, you should understand yourself before anything else, because your friend is your second self.

For this very reason, it is impossible for a person to be happy without having friends. And that's why sad people can be cheered up by – you’ve guessed it – friends.

When you have a good friend, it’s like talking to yourself. Only kindly.

According to Aristotle’s final book of the Nicomachean Ethics, happiness is tightly linked with pleasure.

All beings, whether rational or irrational, instinctively tend toward pleasure and away from pain.

The only life worth living is the one in which you enjoy the right things in the right amounts  because that is what happiness is, basically.

You can think that you’re good, but nobody will believe it unless deeds demonstrate your goodness.

In other words, if you talk the talk but refuse to walk the walk, you’re the opposite of good, no matter who you are, you’re a liar and a hypocrite, and an altogether lousy person.

Analogously, according to Aristotle, there’s no point in analyzing what is good and what is virtuous only on theory. The point is teaching people how to be good, which is precisely what many self-help books are doing today. We feel that Aristotle would have endorsed them.

It is difficult to exaggerate how revered and influential Aristotle’s Nicomachean Ethics has been throughout the history of philosophy. Quite possibly, it may be the single most debated ethical work ever written, which renders our critical review all but obsolete.

It’s very hard to argue with the greatest philosopher ever to set foot on Earth. From a biological perspective, we feel like Sapiens could provide answers for the other end of the spectrum.

Aristotle (384-322 B.C.) was one of the most influential ancient Greek philosophers in the history of Western civilization. He studied at Platonic Academy for two decades, since he was 17 years old., After that, he left Athens to tutor Alexander the Great. Aristotl... (Read more)