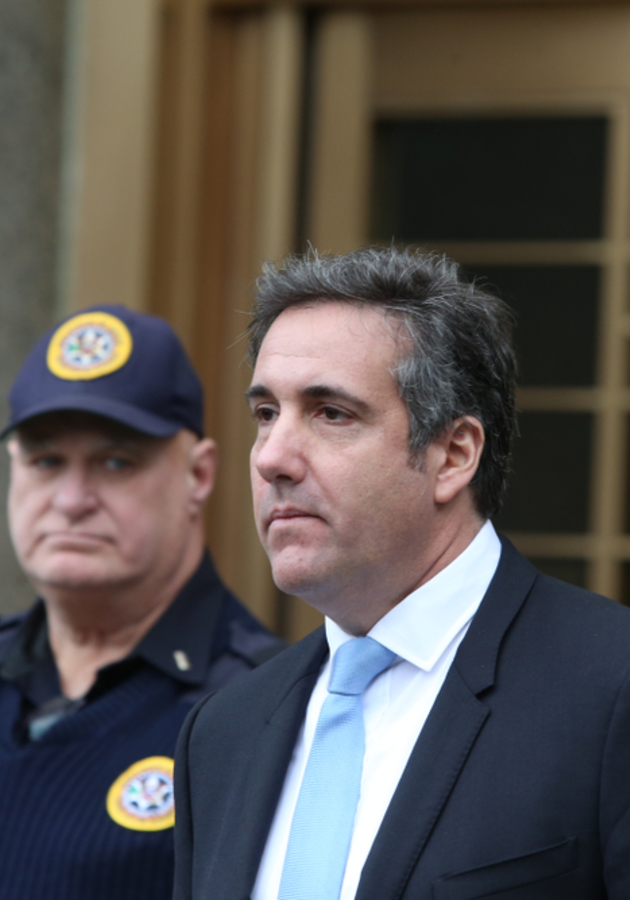 This microbook is a summary/original review based on the book: Disloyal: The True Story of the Former Personal Attorney to President Donald J. Trump

Michael Cohen, the former personal attorney of Donald Trump, was found guilty of fraud and perjury in the context of the Mueller investigation in 2018. The investigation sought to look into any Russian intervention during the 2016 U.S. presidential elections. Cohen plead guilty to tax fraud, bank fraud, and campaign finance violations. He used his time in prison to write “Disloyal,” a book about the real Donald Trump - which Trump tried to prevent from getting published. So, get ready to learn about what Trump is really like.

Michael Cohen’s personal relationship with Donald Trump started in 2006, when Cohen was called upon to investigate a conflict with the board at Trump World Tower. At that time, Cohen was a successful Manhattan attorney and had already long been an admirer of Trump.

Just like Trump, Cohen had always been hungry for power, and this prompted him to ultimately work for Trump. He writes on his relationship with the president, “Over time, as Trump became a patriarchal figure to me and I fell under the trance-like spell of the real estate tycoon, I would come to understand that questions of right and wrong didn’t matter to Trump in the slightest - all that counted to him, and then to me, was winning and displaying blind loyalty.”

Cohen has a wife and two children, Samantha and Jake, and all of them were very outspoken regarding their dislike of Trump. They were against his political views, and did not like that Trump regularly interrupted their family life. Trump would call Cohen night and day to get his advice, to rant, or to have Cohen resolve a conflict for him. Cohen said that he was like an addict in his devotion to, and worship of Trump.

In return, Trump called Cohen family, and even when the FBI started searching Cohen’s flat in the context of the Mueller investigation in April 2018, Trump told him over the phone that he had his back. However, the President quickly changed his tune: in a press conference in the afternoon Trump called Cohen “one of his personal attorneys” instead of his one personal attorney. Eventually, Cohen even received open death threats from the President via Twitter during the Mueller investigation.

Trump’s first bid for presidency was in 2011, when he, quite surprisingly, received 26% support in the public policy poll. This greatly egged on his ego, says Cohen, and at a time when he was already driven by a strong envy and dislike of Barack Obama.

In the media, Trump always referred to Obama as Barack Hussein Obama, which was much in line with his general racist views, says Cohen. Although he never said the N-word in Cohen’s presence, he says Trump had low opinions of black people and of Africa in general. To express his contempt for Obama, Trump even hired a “Faux-Bama” - an Obama impersonator - so that Trump could record a video of himself belittling and eventually firing the 44th President.

So when the polls were shown to be in his favor more than ever before, Trump decided to run for presidency, saying to Cohen: “Shit, I’ve done everything else. Why not? I’m bored with buildings, golf, and television. Being president would be very cool.” The support he had garnered was largely thanks to Trump’s perpetuated theory of Birtherism. This is a theory alleging that Obama was in fact not born in the United States and not a U.S. citizen, and was therefore unfit to be president at all.

However, when Obama released his birth certificate, Trump’s allegations collapsed like a house of cards and so did his popularity. Trump didn’t apologize or admit his mistake, a character trait that ultimately defined his presidency. But he did give up on his 2011 presidential run.

In 2014, Cohen again urged Trump to run for the presidency again. Cohen admits that he largely supported Trump because of the power that it would bring to himself. Cohen was power-hungry. Trump decided to try again and immediately, Cohen was tasked with spreading the news. Both his and Trump’s contacts were synched while working together, and according to Cohen, they were like “Siamese Twins.”

More and more, Cohen became entangled in the “Trump world.” Like the man himself, he started to believe the lies Trump was telling the public, such as the idea that Trump was “a self-made man” or that he was wrongly accused of being a bigot or a racist.

Shaking his reputation as a racist was one of Trump’s greatest challenges at that time. After all, he had already expressed his racism in his view of Barack Obama, and he built on this with anti-Hispanic comments in his speeches to announce his plans to run for president. He described all Mexicans as rapists and drug barons, even while a Mexican man was serving ice cream at the other end of the Trump Tower atrium.

Eventually, Cohen was tasked with making the case to the public that Trump was not racist. So, he set out to find people from various racial, ethnic, and religious groups to speak up for the future president. Cohen even used his own Jewish heritage for the cause, referring to his father as “a Holocaust survivor.”

No tactic was too dirty for the Trump campaign: buying bots to make Trump look better in polls was a standard procedure, as was the systematic character assassination of Trump’s “enemies” such as Ted Cruz. The Trump campaign systematically invented stories and rumors which were then fed to the press - most often to the National Enquirer.

Still though, no one within the Trump campaign (not even Trump himself, says Cohen) believed that he would win. To everyone’s surprise, he won and moved into the White House in 2016.

Another topic overshadowing Trump’s election and his presidency were the allegations of collusion with Russia. According to Cohen, “Trump had colluded with the Russians, but not in the sophisticated ways imagined by his detractors.”

It all started with Trump’s unveiled admiration of Vladimir Putin. Not only was Putin remarkably rich, but he had also managed to dominate an entire nation that he would probably rule for the rest of his lifetime. The fact that this was a completely undemocratic concept was lost on Trump: he was fascinated by Putin’s power and money and the fact that Putin even controlled the press.

In 2015, Cohen was first approached by  on a possible deal with Russia. The plan was to build a Trump tower in the Red Square in Moscow, 120 stories high, with Ivanka Trump-themed spas and Trump restaurants. The plan was so lucrative that the penthouse was to be given to Vladimir Putin for free, an idea which greatly appealed to Trump.

Eventually Trump began to see Putin as a possible ally for himself, not for the United States. When Putin and Hillary Clinton had a falling out, Trump saw it as a chance to turn the tables and gather Putin’s support for his election. According to Cohen, that sums up the alleged collusion with Russia. He says the Trump campaign was simply not organized enough to have back channels to the Kremlin.

Cohen also admits, however, that he did not know about the meeting between Jared Kushner, Trump’s two sons and possible Russian spies in Trump Tower - a meeting intended to dig up dirt against Hillary Clinton.

Cohen writes on this, “I’m not a woman, of course, but I’m smart enough to know that cheating on your wife while she’s breastfeeding your newborn son was not going to please your wife.” Cohen was later forced to lie to Melania about the whole affair in 2018, when both the Stormy Daniels and another affair came to light again.

While Cohen was making up the blatant lie, he was again struck by how easily Trump could change the narrative of his own life, “If facts didn’t suit him, he denied them, changed them, invented them, and then seemingly believed them - to hell with reality - and I willingly played along.”

Covering up affairs and allegations of sexual assaults was one of Cohen’s main jobs. Earlier on in his career he was tasked to cover up the allegations that came from Jill Harth, who said that she had been forcibly kissed by Trump after a party in the 1990s.

Denying these allegations was difficult, since Trump could not resist bragging about his sexual prowess. This led to the Access Hollywood Tape in which he famously said he enjoyed “grabbing women by the pussy.”

According to Cohen, Donald Trump has no real friends. He “has a million acquaintances, pals, and hangers on, but no real friends.” Cohen was one of his most loyal followers, and he ended up in prison. But even he was not trusted with Trump’s secrets: Trump studiously avoids taking responsibility of any kind.

Cohen gives the example of Trump Winery to underline how Trump treats his friends. In 2011, Trump was approached by Patricia Kluge, the ex-wife of one of his longtime friends. She had heavily indebted herself and was looking to sell her house and vineyard. Her asking price was $100 million, which Trump found way too expensive.

According to Cohen, Trump gets a thrill out of taking advantage of people who had once been richer than him. Trump promptly set out to identify the weak link of the family - which he believes every family has - and soon found it: Kluge’s son was facing bankruptcy and owned the land that led up to Kluge’s house. Trump bought the land for a comparatively small sum and then let it go to waste so that potential buyers of the Kluge property would be discouraged.

Then, he bought the land surrounding the house and finally, threatened to build a 20-foot concrete wall right outside the windows of the Kluge mansion with giant letters spelling “Trump Winery.” The bank was convinced to sell him the house as well and Trump managed to get the entire property for $13 million, instead of $100 million.

The most remarkable thing about this story is that Trump somehow managed to convince Patricia that he had done her a favor, even though she walked away without a penny and a bankrupted son. Cohen says that degree of rationality would be unusual for Trump.

Michael Cohen was one of Trump’s closest friends for more than a decade and ended up in prison. He deeply regrets his loyalty to Trump and his actions while working for him. Cohen also admits that he still admires Donald Trump, however, even after all that has happened.

“Disloyal” is a deeply personal look at the 45th president of the United States. It provides a unique inside look into the workings of Donald Trump’s mind.

Now that you know how Trump came to be President, why not read “Fire and Fury” by Michael Wolff to learn more about the Trump White House?

Michael Cohen is a disbarred lawyer who was attorney for U.S. president Donald Trump between 2006 and 2018. He was a close confidant of Donald Trump. Following the investigation into Russian interference in the 2016 U.S. elect... (Read more)