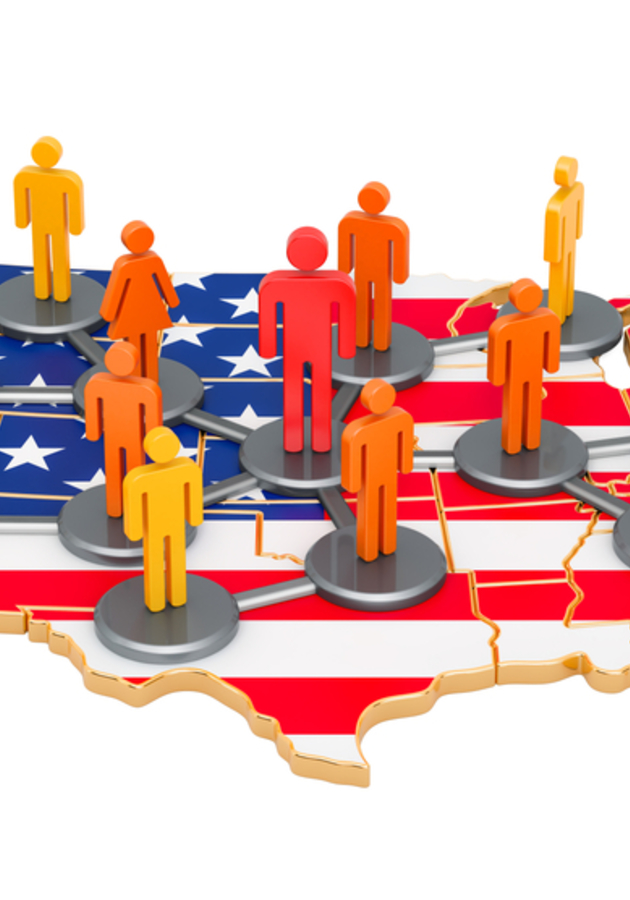 This microbook is a summary/original review based on the book: Caste: The Origins of Our Discontents

When hearing the term “caste,” you probably think of India. But in fact, modern-day U.S. was built on a caste system shockingly similar to that of India, and even that of Nazi Germany. To justify slavery, a caste distinction was drawn between black and white citizens in the U.S., with whites at the top. This system still defines social structures in U.S. society to this day, even though the U.S. has abolished slavery. Get ready to learn how caste functions and what you can do to fight it!

In 2016, an unusual summer heatwave struck the Siberian tundra. Soon after, the indigenous herdsmen working with reindeer in the area succumbed to a mysterious illness involving high fever and stomach pangs. They eventually had to be airlifted out of the area and taken to the nearest hospital.

Soon after it became apparent that the heatwave had caused much of the Siberian permafrost to melt, exposing a toxin buried deep underneath from the last war in 1941: anthrax. The pathogen reawakened in the summer of 2016, as alive and deadly as before, and spread through the reindeer to the herders.

It had never died, much like the human pathogens of hatred and tribalism that were reactivated in the U.S. elections in 2016, over on the other side of the planet. A billionaire with little political experiences talked about nasty women, “shithole nations” and Muslim bans - and eventually went on to win the presidential election.

Many American nationals at the time expressed disbelief – the mere possibility of having such a man as president seemed to run counter to their beliefs of what America was. And while gender, rather than race, was an issue in that particular election, it threw the American caste system again into sharp relief.

In the years before the election, the U.S. Census Bureau announced that by 2042, white people would no longer constitute the majority in the U.S. This coincided with an African American man, historically part of the lowest American caste, to be elected to the highest office in the country. The dominant caste saw its position threatened, which is why, in 2016, they elected a man who promised to restore the old order and by extension, uphold the American caste system. So what exactly is caste?

Imagine you are buying an old house. After moving in, you notice a welt in the ceiling, which eventually becomes a wave. You decide to hire a professional to find out what might be amiss, and he eventually notices fissures in the very foundations of the house. You could, of course, decide to ignore these. But that would mean risking the house collapsing above your head. Instead, you should probably get to work and try to repair the skeleton structure holding your house together.

The author Isabel Wilkerson says America is like an old house. Beneath the plaster, the wallpapers, and the paint, there is a deeply faulty skeleton structure dictating everything that happens in the United States: the caste system.

The author describes race as “the visible agent of the unseen force of caste.” The rules that uphold the caste system are subconsciously learned while growing up - just like your instinctive knowing of how to use language correctly without needing to know the underlying grammar rules. The caste system casts everyone into perceived rules and precludes anyone within the system from truly being themselves.

There are eight pillars required to uphold a caste system. The first pillar is “Divine Will and the Laws of Nature.” This means that the caste system is justified either by religious or natural laws. In India, the caste system is based on an ancient Hindu text. The deity Manu sorted people into classes according to what their jobs were. At the very bottom of this new social system were the Dalit, or the Untouchables.

The perceived inferiority of African Americans was justified by another religious text, the Old Testament. In it, Noah curses his grandson Canaan, saying, “Cursed be Canaan! The lowest of slaves will he be to his brothers.” The descendants of Canaan were later interpreted to be Black.

The second pillar is that of heritability. Wilkerson describes heritability as “clear lines of demarcation in which everyone was ascribed a rank at birth, and a role to perform, as if each person were a molecule in a self-perpetuating organism.” In a caste system, you are born into a caste and you cannot escape your birth-assigned caste.

Even though in European society, children would receive the name of their father, European settlers decided to assign caste according to whatever caste the mother was in to keep the caste system intact and solve the issue of sexual abuse by male white slave owners.

The third pillar is that of “Endogamy and the Control of Marriage and Mating.” Closely related to the second one, this means that in a caste system, people are only allowed to marry within their own caste. In the United States, even romantic relationships between black and whites were strongly discouraged and even punished in the era of slavery.

In 1630 Virginia, Hugh Davis, a white man (part of the dominant caste), was sentenced to a public whipping for having an affair with a black woman. This was a notable incident since even members of the subordinate caste were encouraged to watch the whipping. By discouraging friendship, romance, and even marriage between castes, empathy is diminished, and members of the upper caste come to see those beneath them as less human, and even as enemies.

The fourth pillar is that of “Purity vs. Pollution” – the belief that the dominant caste can be polluted by coming into contact with members of the lower castes. An extreme example of this is the Untouchables in India – they even have to take care that their shadow does not fall onto someone from an upper caste.

The fifth pillar of the caste system is that of occupational hierarchy. In every caste system, jobs are assigned according to whatever caste someone is in. In India, the Untouchables have to do the most demeaning jobs, as did African Americans in the time of enslavement.

The South Carolinian Senator James Henry Hammond introduced the idea of socially assigned jobs in 1858, when he suggested to the Senate, “In all social systems, there must be a class to do the menial duties, to perform the drudgery of life.” According to him, whites had already done blacks a favor by elevating them above their God-given status and turning them into slaves.

Hammond’s statement is also an example of the sixth pillar of caste: dehumanization and stigma. In all caste systems, members of the lower castes are systematically dehumanized by attaching a stigma to them. This happens to an entire group, rather than individuals – because it is easier to dehumanize an anonymous group of people. An individual’s humanity is distinctive, while a group’s is not.

The seventh pillar of caste is “Terror as Enforcement, Cruelty as a Means of Control.” All caste systems rely on the passivity of the dominant class in looking on when unspeakable evil is done to their fellow human beings. Both Nazi Germany and the United States employed whipping as a means of punishment – in the U.S., this was up to 400 whip lashes, considerably more than the Jews were given in the work camps.

The final pillar of caste is “Inherent Superiority vs Inherent Inferiority.” Caste systems employ symbols and customs that shape everyday encounters and continuously remind the different caste members of their place in society. In the U.S., an entire parallel society was created for African Americans, ranging from black and white children studying from different textbooks to black corpses being stored separately from white corpses in hospitals.

Looking toward the future

Sadly, the caste system of the U.S. is not a thing of the past, as the 2016 elections showed. A society defined by caste is clearly flawed, preventing a large group of its members from fully participating. Think how different the world might look nowadays if 11 million Jews had not been killed in Nazi Germany, or 750,000 Americans had not been killed in the Civil War over the right to enslave others.

Think of all the innovations a fully equal society could come up with to solve the existential threats facing humanity nowadays. One of the most brilliant minds that ever lived was Albert Einstein, a Jew who escaped the caste system of Nazi Germany just in time, and subsequently strongly voiced his opposition to the caste system he found in America.

So how can we move forward? Wilkerson says present-day U.S. can learn a lot from modern-day Germany. Germany has dealt with the atrocities of its past and all over the country, you will find the names of people who died during the Holocaust engraved on sidewalks. Wherever you step, you are reminded of the victims of the caste system of Nazi Germany.

And what can you, as an individual, do to create a more equal society? The answer is simple. Radical empathy is needed to heal the broken social system of the U.S. Take the author as an example. As an African American woman, she is accustomed to everyday racism justified by the caste system, such as being asked whether the lady of the house is in when she opens the door of her own home to strangers.

One example from her life shows how empathy can eradicate the boundaries created by caste. Shortly after the 2016 elections, she had arranged for an engineer to visit her home because of a leakage in the basement. When she opened the door, it became obvious from the engineer’s cap that he was a Trump supporter. Instead of doing his job, he simply watched as she moved heavy furniture around and tried to find the cause of the leakage herself.

But then, Wilkerson brought up the recent death of her mother. The engineer had lost his mother too, and they quickly bonded over this. The engineer then started to do his job, and all the while, both of them talked animatedly. By simply showing human empathy, the lines of caste were eradicated.

The racial segregation that started in the U.S. to justify the enslavement of African Americans was the foundation of an American caste system that still persists to this day. If you want to contribute to a more equal society in the future, use radical empathy in all your interactions with members of a different caste, especially when lower than yours.

“Caste” was an instant bestseller and was selected by Oprah Winfrey for her book club. In October 2020, Netflix announced its intention to turn “Caste” into a feature film.

Educate your friends and family about the caste system in the U.S.!

Isabel Wilkerson is an American journalist and was the first African American woman to win the Pulitzer Prize for her work. Wilkerson has written for the Los Angeles... (Read more)