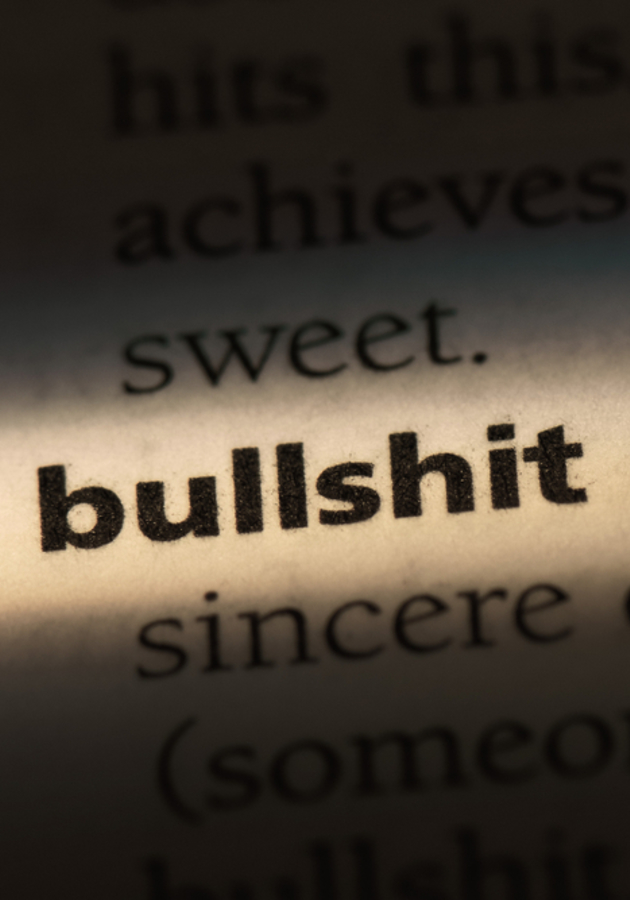 This microbook is a summary/original review based on the book: Calling Bullshit: The Art of Skepticism in a Data-Driven World

In the era of fake news and misinformation it can be increasingly difficult to discern fact from fiction. We are buried in a deluge of information every day, so how do we identify the bullshit claims among them? Luckily, there are a few easy ways in which you can protect yourselves and others from falling for bullshit. The authors of “Calling Bullshit” teach a course of the same name at the University of Washington, so get ready to learn how to call bullshit from the master-bullshit-callers themselves!

What is bullshit anyway?

You may have heard of the claim that autism can be caused by the measles-mumps-rubella (MMR) vaccine. This was first claimed by British physician Andrew Wakefield in a 1998 study published in “The Lancet.” The study caused a global fear of vaccines and a rise in the anti-vaccine movement. However, since then, the study has been thoroughly discredited. In 2010, Wakefield was found guilty of serious professional misconduct in connection with his 1998 study, and his license to practice medicine in the UK was revoked.

Still though, the bullshit claim Wakefield made persists, with disastrous public health consequences. Vaccine rates still remain dangerously lower than in the early 1990s. The fact that the bullshit lives on, even though it has been disproven is an example of what the authors call Brandolini’s principle: “The amount of energy needed to refute bullshit is an order of magnitude bigger than [that needed] to produce it.”

But what exactly is bullshit? The authors differentiate between old-school and new-school bullshit. Old-school bullshit is characterized by fancy language and rhetoric and involves statements such as “Our collective mission is to functionalize bilateral solutions for leveraging underutilized human resource portfolio opportunities,” which, in other words, means, “We are a temp agency.”

New-school bullshit, on the other hand, attempts to create an impression of accuracy and rigor by using the language of science, math, and statistics. And this is the potentially more dangerous kind of bullshit we are faced with nowadays – since it sounds very scientific, few of us feel empowered enough to challenge such statements.

But fear not, anyone can learn how to spot and call bullshit, even when it is cloaked in fancy numbers and data. And once you know how to identify false claims and fake news, you will be able to participate more fully in the democratic process.

You’d think that in the age of smartphones, when you can look up any fact, anytime, anywhere, we would have moved past an era of bullshit. Instead, smartphones have just become one more way in which bullshit is spread. While advances in technology could have finally liberated us from the dark ages of misinformation and lies, technology has, in fact, made the problem worse.

Think about it. Before the advent of the internet, you needed a lot of money to get something published. Nowadays, anyone can publish something online, without so much as spending a penny. Obviously, the internet democratized the publishing industry – but it also eradicated the process of fact checking.

Back in the day, to get reliable news, you would subscribe to a magazine or newspaper. That was how the news industry financed itself. Nowadays, few people still opt for a physical newspaper or magazine subscription, and newspapers now have to finance themselves through a click-driven internet economy. The kind of articles that usually generate the most clicks - and therefore the most money - are the kinds that can demonstrate a clear relation between cause and effect.

Consider a study about kissing as an example, which was put together after surveying 700 college students. The aim of the study was to find out which personality traits would go along with never having kissed before college. The study then identified a correlation between kissing and positive self-esteem and concluded that self-confidence made people more attractive in high school. While this is one possible explanation for the findings, it is not the only one. Maybe self-confidence was caused by having been kissed, and not the other way around?

Correlation does not imply causality, but a lot of bullshit articles out there try to make you believe that.

How data can be manipulated

Aside from confusing correlation with causality, it can also be surprisingly easy to produce bullshit using statistical analysis. You would think that data could not lie, but it can. To collect data, it is never the whole population that is questioned, but rather a small sample of large groups.

To be effective, a study needs to come from a random sample of people: If you were trying to find out a population’s voting tendency, for example, and you were to only ask shoppers at an organic supermarket or only the visitors of a gun show, you would probably end up with quite different results, that would not reflect the views of the entire population. It is also important to note that the very act of asking questions in a sampling effort might influence people’s answers.

As the authors put it, “What you see depends on where you look,” and they demonstrate this quite convincingly in looking at search suggestions for “my husband is ...” on Facebook or Google. If you were to use these findings to gain an insight into marital bliss in 2019, Facebook would suggest a happy marital life with search suggestions such as “... my best friend” or “... my everything.”

Sadly, such a selection bias seems to be the norm in most studies in social psychology, where populations questioned the most are usually Western, educated, industrialized, rich, and democratic. Very often, it is also college students who answer surveys for study credits - hardly a good representation of the entire population.

Another way in which data can be misleading is exemplified by the so-called “friendship paradox.” That is, that most of your friends have more friends than you do, and this is true for anyone. The paradox was first discovered by sociologist Scott Feld in 1991, but still holds true in the age of social media. In looking at 69 billion friendships, it turned out that 93 percent of Facebook users had fewer friends than their friends did!

Imagine you are following Rihanna and 499 other people on Twitter. Since Rihanna has 90 million followers, that averages out to at least 90,000,000/500=180,000 followers for all your other friends. These selection effects are also known as observation selection effects as they depend on the perspective of the observer.

Now that you have learned a bit about how bullshit can be created, it is time to look at how you can spot bullshit in your day-to-day encounters. First of all, always question the source of information when confronted with something you have never heard before. Ask yourself: “Who is telling me this? How does he or she know it? What is this person trying to sell me?”

Second, be careful of unfair comparisons. A few years back, a global ad campaign proclaimed that “Airport Security Trays Carry More Germs Than Toilets!” – the horror scenario for every germaphobe that ever had to fly. However, the study fueling the ad campaign had only looked at respiratory viruses, which are viruses transmitted through tiny droplets in the air. Since people are unlikely to cough and sneeze onto toilet seats, these kinds of germs will hardly ever be found on toilet seats - but would obviously be more present on airport security trays.

Many bullshit claims rely on such unfair comparisons for shock value. Furthermore, whenever something seems too good or too bad to be true, it probably is. Another way in which you can quickly spot bullshit is by starting to think in orders of magnitude. Estimating numbers to the nearest power of 10 can help you quickly identify bullshit claims without the need for a calculator.

Say, for example, your friend claimed there were 121,000 men named John Smith currently living in the UK. Is this statement true? The first step is to settle on a population number in the UK. It was 67 million in 2018, but let’s say you go with 100 million. Then, how many of these people are called John? One in 10 sounds like too much, one in 1,000 sounds too little, so, you go with one in 100.

Finally, for the last name Smith, you also decide for one in 100. Taking all of this together, you would arrive at 10,000 John Smiths in the UK – a bit more than the actual number, which is 4,700, but much less than the bullshit claim your friend made. This process of estimating is also known as the Fermi estimation, named after the physicist Enrico Fermi.

Finally, try and avoid confirmation bias: we are always more likely to believe something that confirms a belief we already hold. Don’t just simply fall for a bullshit claim because it confirms what you believe to be true. As the sociologist Neil Postman put it, “At any given time, the chief source of bullshit with which you have to contend is yourself.”

Make sure you construct a successful refutation of a bullshit claim. The easiest way to do this is through reductio ad absurdum. It is an especially memorable way of debunking a bullshit claim as you render it laughable.

Take fMRI (functional magnetic resonance imaging) studies as an example. There once existed controversy about how accurate the findings from fMRI brain scans were, but it took some researchers using the brain scans on a dead salmon to show how scientifically problematic fMRI studies really were. According to the scans, the dead salmon’s brain apparently responded to being shown pictures and to being spoken to.

Sometimes the bullshit someone utters is deeply entangled with a person’s identity, so you need to find a way to refute the bullshit claims without attacking the person’s identity. This includes convincing your great aunt that drinking water with an amethyst in it has no effect whatsoever on her electrolyte levels.

Here are five tips for how to correctly call bullshit on something:

With the rise of the internet and information technology such as smartphones, the spread of misinformation is more alive than ever before. If you want to protect yourself and others from falling for bullshit claims, you have to constantly check your sources and stay alert when you hear of something that confirms your own beliefs or that simply sounds too good to be true.

Keep practicing your calling-bullshit skills by using the five tips above.

Jevin D. West is an associate professor in the Information School at the University of Washington. In his research, he focuses on the scien... (Read more)

Carl T. Bergstrom is a theoretical and evolutionary biologist. He is also a professor at the University of Washington in Seattle. In his work, Bergstrom looks at the flow of information... (Read more)